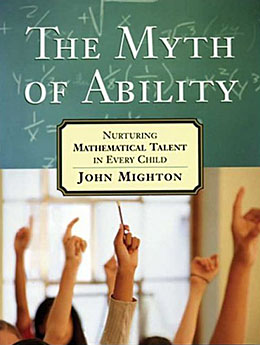 THE MYTH OF ABILITY:
Nurturing Mathematical Talent in Every Child
by John Mighton

John Mighton is the founder of JUMP (Junior Undiscovered Mathematical Prodigies), an expanding educational charity that has grown to provide free math tutoring to 12 inner-city Toronto schools. The Myth of Ability is the story of Mighton’s remarkable success with this endeavour, a story whose inspiration derives in large part from the profoundly democratizing principle on which it is based: that all children – not just those with innate aptitudes – are capable of achieving sophisticated levels of mathematical mastery through a combination of positive feedback and an approach that distills the subject into the most elementary concept.

In Mighton’s view, children fail only when we make assumptions about the limits of their potential and cease to encourage them any further, a phenomenon he has observed all too often. Mighton’s argument is persuasive in large part because he himself is one of its products. Already a successful, award-winning playwright, he began studying mathematics in his late twenties, eventually achieving a PhD, despite the fact that it was a subject he had fared poorly at in school and that he had been discouraged from pursuing.

The first half of The Myth of Ability explains the evolution of JUMP, charts some remarkable individual success stories, and debunks what Mighton feels are some common myths about mathematics. The second part consists of extracts from the program’s teaching manual, allowing readers to evaluate Mighton’s methods for themselves. Throughout the book, Mighton does not shy away from making overtly political statements about the state of education. He is passionate about his mission and critical of governments that he feels have given students short shrift through inadequate texts, poorly designed programs, and misguided testing methods. It is for these reasons, he claims, that we are witnessing ever-widening intellectual gaps within today’s classrooms.

Mighton’s gift is his ability to render difficult problems into steps that he believes students cannot fail to grasp. This skill is evident throughout the text, which is written in prose is as lucid and inspiring as Mighton’s potentially revolutionary approach to a challenging topic.