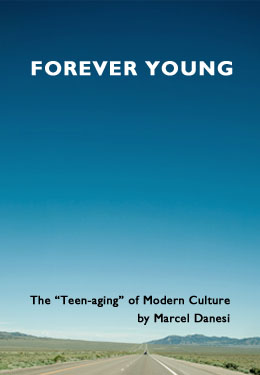 FOREVER YOUNG:
The “Teen-aging” of Modern Culture
by Marcel Danesi

In Forever Young, University of Toronto professor Marcel Danesi aims to expose our society’s view of adolescence and its associated “problems” as an artificial construct perpetuated by a media-driven culture. This is worsened, Danesi argues, by a tendency to blur the lines between adolescence and adulthood through the worship of all things youthful – what he calls the “forever young syndrome.” The image of an aging hippie that Danesi witnessed at a 1994 Grateful Dead concert is the book’s leitmotif for our culture’s pathetic obsession with recapturing lost youth.

Danesi’s premise is intriguing. Almost immediately, however, the book loses focus, lapsing into long-winded digressions and becoming mired in particulars irrelevant to the central thesis. Although Danesi makes reference to a research team, most of his conclusions are drawn from highly anecdotal evidence and his own, sometimes bizarre musings about popular culture. Despite criticizing the ephemerality of pop music, he spends a great deal of time weighing the merits of its various practitioners, from Procol Harum to Eminem, employing a host of brazenly subjective modifiers like “weird,” “slop,” “moronic,” or “garbage.” This, while repeatedly pointing out the rather obvious fact that almost none of the music attains the level of “high art” (the Beatles’ “Yesterday” apparently comes close).

An inordinate amount of space is given over to examples of teen slang, when a few instances would have sufficed. Danesi warns repeatedly of the “dangers” of adults attempting to maintain their youth by acquiring the tastes and outward trappings of adolescence, but it is never really clear, beyond being somewhat undignified, what that danger really is.

Although Danesi says at the outset that, because of the importance of its subject matter, his book is not aimed primarily at an academic audience, his writing lacks the light touch and, above all, the sense of humour, to make his work relevant to a wider readership.