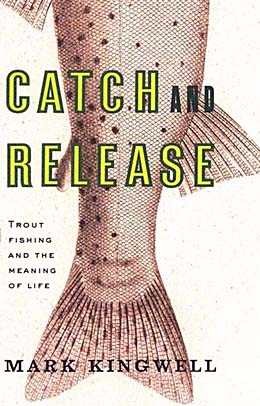 CATCH & RELEASE:
Trout Fishing and the Meaning of Life
by Mark Kingwell

Those familiar with University of Toronto philosopher, critic, and media-wunderkind Mark Kingwell’s work may find the subject of his latest book, trout fishing, somewhat unlikely. Or not. Catch & Release is ostensibly a memoir dealing with Kingwell’s reluctant embrace of the joys of fly-fishing following a weekend excursion with his aging father and two brothers. But like his other books, the subject matter proves to be primarily a device for Kingwell to ruminate on a variety of wide-ranging topics.

Careful to point out that he is not a fishing expert, Kingwell announces at the outset that he has not written a book about fishing but a book about thinking about fishing. Seeking to distance himself from what he considers the overworked literary (and frequently filmic) genre of sports as metaphor for life, he states that although fishing may open avenues for thought and reflection, it, like other sports that tend to lend themselves to excessive philosophizing, is also, simply, a sport.

In the end, Kingwell’s inability to avoid this very pitfall constitutes both the failure and charm of the book. His voice at the outset is chatty, self-deprecating, and light, with much mirth derived from his ineptitude at sports and manly pursuits in general. From here he delves into topics ranging from the ethics of fishing, the seduction of the tackle shop, and the delights of drink, interspersed with some amusing anecdotes about his various family members.

But having painted himself as an affable fellow with a penchant for Kokanee beer and hanging with the boys, by book’s end Kingwell is flexing his intellectual muscles with rather heavy-handed philosophical discussions of such subjects as the nature of procrastination and boredom. These ruminations may, ironically, alienate some readers. Kingwell has been both admired and derided for this tendency to mix the personal with high- and low-brow cultural analysis, and this same indulgence in Catch & Release will probably merely entrench the opinions of both camps.