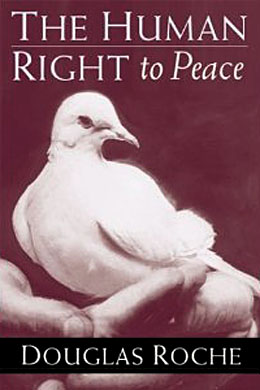 THE HUMAN RIGHT TO PEACE
by Douglas Roche

Senator Douglas Roche, a former journalist, diplomat, and educator who has also served at the UN, has been actively involved in issues related to disarmament and development for 30 years. His passion for the subject is evident in this, his latest of 16 books. Here, Roche argues persuasively for the need to supplant our current culture of war with a culture of peace. Such an argument might seem like youthful idealism, but Roche’s impressive credentials combined with years of experience travelling in regions devastated by war and poverty lend his ideas a credibility, even a pragmatism, that is hard to dismiss.

What is paramount to Roche is the urgency for such a paradigm shift in an age where the potential for mass destruction has grown with the number of international players who have acquired nuclear weapons. The spread of terrorism around the world has made the potential for such attacks even more real. He debunks what he believes to be the “massive lie” of these weapons – that they create security – and reveals how, despite decades of disarmament treaties and declarations, the world’s largest powers continue to allow their own weapons arsenals to proliferate.

The Human Right to Peace offers an excellent primer on the conflicts of the 20th century, paying close attention to events of the last few decades and culminating in the very recent developments in Iraq. Roche provides a wealth of statistics as well as an assessment of the impact of international conferences and treaties relevant to disarmament, development, environmental, and peace initiatives.

Roche also explores the crucial roles that need to be played by the UN – a body that he strongly supports and whose important work he feels is often undervalued. He is optimistic about the potential for recent technologies, especially the Internet, to empower individuals for action within both global and local contexts.