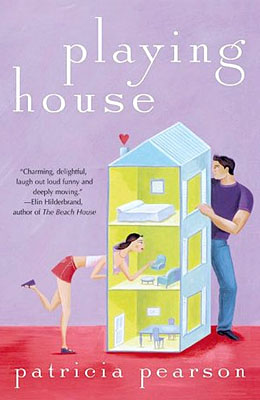 Positioning its protagonist somewhere between the worlds of Helen Fielding’s Bridget Jones and Allison Pearson’s Kate Reddy, Playing House falls effortlessly into the recent boom in narratives that explore the lives of thirtysomething females pursuing sexy careers while keeping paranoid tabs on their biological time clocks.

Frannie MacKenzie is a transplanted Torontonian working as a magazine editor in New York whose lifestyle is a fashionable mix of cocktails, art gallery memberships, and meetings with famous authors. All of the above are suddenly thrown into jeopardy when, after ignoring some obvious warning signs – including an episode of vomiting into a sweater display at a Gap store – Frannie realizes she is pregnant. More surprising to her is the fact that she wants to keep the child, despite barely knowing the father, a jazz musician named Calvin from Cape Breton whose last name she can barely pronounce.

After visa problems and a lack of funds land Frannie back in Toronto, her life quickly devolves into one of insipid domesticity. She and Calvin wind up house-sitting her brother’s achingly trendy Cabbagetown home, where the Belgian linen quickly comes to double for diapers. After her outraged brother returns, they flee to Calvin’s family home in Cape Breton, where Frannie’s bucolic dreams of a simpler lifestyle are dashed in a single visit to the local bingo hall.

Pearson’s novel is aimed squarely at initiates into the decidedly unglamorous world of new motherhood, many of whom will find much to relate to in Frannie’s comic take on her trials and tribulations. An occasional pitfall of such an approach is the feeling that an “it’s so true” response is being demanded from the reader. For the most part, Pearson keeps the pace brisk and the touch light, littering Playing House with humorous anecdotes while allowing for occasional moments of poignancy.