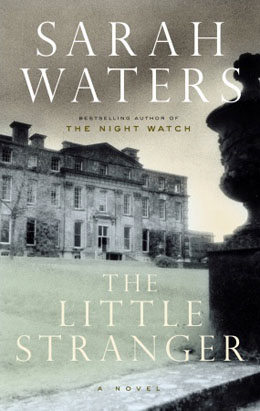 THE LITTLE STRANGER
by Sarah Waters

Sarah Waters, having once bagged a coveted spot amongst Granta’s Best Young British Novelists, is working hard with this, her fifth novel, to keep the epithet—give or take the “young” part (although in novelist years, 43 is still whippersnapper territory). Waters, a self-labelled lesbian writer, has written extensively on Sapphism in past books, often within a Victorian context. She turns away from these themes a bit here, but carries over the dark, sinister overtones, re-tooling them into a full-on, down-the-hatches ghost story, which, like her last novel, Night Watch (shortlisted for both the Booker and Orange prizes), takes place in post-war 1940s England.

The story begins with the book’s narrator, Dr. Faraday—just into his forties and having overcome humble roots to become a moderately successful physician—filling in on a house call at the stately but crumbling local manor known as Hundreds Hall. Shocked by the tarnished grandeur of the place as he drives down its weed-choked gravel paths, Faraday recalls the first time he saw Hundreds as a 10-year-old boy. His mother, once a servant there—and still with friends amongst them—had ushered him in through a side door for a rare, thrilling glimpse of Hundred’s then-lavish interior. Awed by his surroundings, the young Faraday impulsively breaks off a piece of the hall’s decorative plaster border with his penknife and pockets it. Thinking back on the incident, he muses:

I didn’t do it in a spirit of vandalism. I wasn’t a spiteful or destructive boy. It was simply that, in admiring the house, I wanted to possess a piece of it—or rather, as if the admiration itself, which I suspected a more ordinary child would not have felt, entitled me to it. I was like a man, I suppose, wanting a lock of hair from the head of a girl he had suddenly and blindingly become enamoured of.

The memory auspiciously presages what becomes Faraday’s plunge into the world of Hundreds and its resident family of over 200 years, the Ayreses, who, like the building itself, have seen better days. Faraday discovers that Mrs. Ayres, now a widow, tragically lost her 6-year-old daughter Susan to diphtheria shortly after his first visit. She lives with her remaining two children: Roderick, who tries to keep the hall afloat despite war injuries that have left him with a badly crippled leg, and his sister, Caroline, a capable but plain woman referred to euphemistically by locals as “a natural spinster” and “rather hearty.”

Faraday, accepting an invitation to tea after the call, finds that the house, despite its decrepit state, still has the power to stir his imagination. Seeing the Ayreses’ financial predicament, he offers to administer weekly electrical treatments to help Rod’s damaged leg, waiving his fee on the excuse that the results will form the basis of a paper he hopes to publish.

But a series of strange, unsettling occurrences soon begins to take place at Hundreds. The Ayreses make the bold step of hosting a small soirée for a few local, better-off families, only to have it end in disaster when their normally placid Labrador viciously bites the face of the young daughter of one of the guests. Convinced there is a malevolent force in the house, Rod descends into sleepless paranoia. Eerie burn marks appear on his walls and otherwise inanimate objects take on a life of their own. Eventually, Faraday convinces Caroline and her mother to send Rod to a mental hospital, notwithstanding the latter’s claim that, without his vigilance, the presence will torment other family members—which, of course, it does.

Despite the increasing uncannyness of events at the hall and other tragedies that follow, Faraday, exasperatingly, manages to find a rational explanation for all of them. As his involvement in the affairs of Hundreds deepens, he also comes to believe he is in love with Caroline, and proposes marriage. She accept, but without obvious enthusiasm.

When any ghost story starts to get good, the fear sets in: how it can possibly end satisfactorily Isn’t disappointment inevitable

Waters, however, cleverly hedges her bets by making the novel as much about class and transitional post-war British society as about evil spirits. The cast of characters is small but expertly rendered. The Ayreses cling to the vestiges of a genteel, Victorian and Edwardian past despite the fact that their indigence has forced them to sell off the land around Hundreds, allowing a new housing development to encroach, literally, right up to its doorstep. In the end, Hundreds Hall is as much a character as any of the humans in the book, brought to life through Waters’ masterful, highly visual descriptions.

The words “ghost” and “haunted” don’t appear till almost the novel’s end. Being British apparently makes having a ghost an awkward and embarrassing thing—especially a nasty one like the Ayreses’—but it also gives the plot a believable, almost practical aspect.

And here’s the kicker: the ending does not disappoint, but is a brilliant, unexpected wrap to this page-turner of a book. If you read only one ghost story this summer, make it this one.