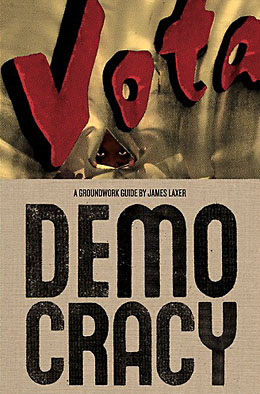 James Laxer’s Democracy, the latest in the Groundwood Guide series, begins with a statement that may surprise young readers: “In the West, citizens assume that they live in a democracy.” He then lists some of the characteristics typically associated with democracy: the right to vote in free elections, the right to self-expression, and the quest for social justice. The “but” comes later, when Laxer, a prominent political science professor and commentator, explains how the rise of multinationals has widened the gap between rich and poor and has endangered our democratic process to such an extent that “unless it is effectively addressed, little else that is achieved will matter very much.”

The book begins with an excellent general overview of democracy’s major milestones, beginning with its origins in ancient Greece and charting its rise alongside capitalism in revolutionary France and America. Democracy in the Soviet Union and the developing world are treated in separate, equally succinct chapters.

Laxer discusses how the legacy of colonialism, suffrage, and civil rights have shaped modern notions of democracy. In the chapter on South America, which he sees as the canary in the coal mine for democracy’s future, he outlines how American interference can thwart early attempts at democratic reform.

Democracy is written at a fairly sophisticated level that may overestimate its readership’s grasp of recent history. At the heart of the book, however, is the message that we cannot take democracy for granted: “There is no compelling evidence that there is a universal yearning for democracy in all cultures and social settings, and we can dispense with the dubious proposition that democracy is an outgrowth of human nature.”

Although there are some gaps here – a discussion of the so-called Bush Doctrine, for example, would have been timely for young readers – Laxer’s main point, that democracy is subject to revision, recall, and compromise, offers needed perspective to a generation immersed, like none before it, in the consumerism that fuels the global economic agenda.