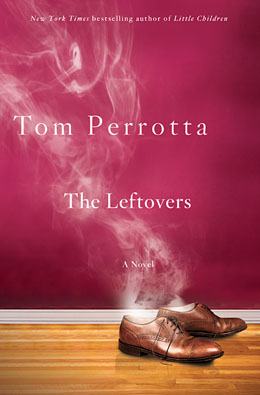 THE LEFTOVERS
by Tom Perrotta

In his six novels, Tom Perrotta has carved a niche for himself as a lively  purveyor of suburban-based American satire. Two of his books, Little Children and Election were made into Academy-Award nominated films and plans were afoot to turn The Leftovers into an HBO series before it even hit bookstore shelves.

Set in the fictional New England town of Mapleton, The Leftovers takes place three years after an event dubbed the “Sudden Departure”—a Rapture-like phenomenon in which millions of people worldwide vanished into thin air. But perhaps the most notable thing about the event was its random, half-baked feel. Christians, in particular, “couldn’t help noticing that many of the people who disappeared on October 14th—Hindus and Buddhists and Muslims and Jews and atheists and animists and homosexuals and Eskimos and Mormons and Zoroastrians, whatever the heck they were—hadn’t accepted Jesus as their personal savior.”

Bewildered and grief-stricken by their losses, those left behind take part in “manic socializing”—packed bars, overnight potlucks, block parties that last entire weekends. There’s a decidedly bitterer feel among the Christian remnant, however. Tormented by the idea “that Judgment Day had come and gone, and he’d been found lacking,” Reverend Matt Jameson now puts all his energy into a Rapture Denial newsletter aimed at exposing the personal shortcomings and sexual peccadillos of the departed.

Our view of the strange new social landscape is filtered through the lens of the Garvey family. Kevin Garvey has given up his job as owner of a successful chain of supermarket-sized liquor stores to take on the mantle of mayor, the job a needed distraction now that he finds himself alone at home with his disenchanted teenage daughter Jill and her friend Aimee who, much to Kevin’s dismay, insists on lounging about the house in skimpy tank tops and underpants.

Predictably, the Sudden Departure spawns a fresh crop of charlatans who sense in the widespread sense of dislocation an opportunity for power and self-aggrandizement. Kevin’s son Tom drops out of college to fall in with Holy Wayne’s Healing Hug movement, despite the fact that its leader has recently been accused of sexually exploiting young girls, his teenage “spiritual brides.”

Kevin’s wife Laurie, more disturbingly, has left to join the Guilty Remnant, a more sinister cult whose “taste for civil disobedience and political theater” conveniently includes refusing to pay taxes and utility bills. After renouncing their families and taking a vow of silence, the group’s adherents, dressed all in white and, like characters out of Mad Men, cigarettes always in hand (cancer, like global warming, no longer being a cause for concern) wage a silent staring campaign against members of the public.

One of Perrotta’s most obvious mistakes in this novel is allowing us inside Laurie’s mind—there’s simply too much doubting skeptical self-awareness, too much lingering concern about her daughter, for us to buy into the idea that she would give up a lifetime of agnosticism to run off with a crackpot cult of chain smokers.

In the novel, October 14 supplants September 11 as the date where everything changed, the pre/post dividing line between eras (it’s surely no coincidence that this novel launched on the 10th anniversary of the latter). At one point, Tom compares the two events explicitly, noting the unique media challenge posed by the Sudden Departure, what with its lack of a single, defining image and blamable bad guys.

Although he resists signing the divorce papers that Laurie wordlessly presents him with, Kevin nevertheless takes a stab at a relationship with Norah, a woman who, having lost her entire family to the Sudden Departure, becomes the town’s de facto poster child for its devastating arbitrariness. But Norah is simply too shattered inside, and the relationship stalls before it can even get off the ground.

Which is a bit the problem with The Leftovers as a whole. Unlike the widespread, post-9/11 rhetoric, no one here is really insisting on the necessity for resilience. So once we’ve had our laughs about the wacky, adulterous evangelicals, or about the idea of Adam Sandler, Vladimir Putin and the Pope getting equal billing on the same post-Rapture marquee, we’re left with a lot of sad, defeated people trying to patch up their lives without the benefit of a plot to guide them. In the end, for all his witty cynicism, Perrotta still finds it necessary to fall back on that enduring cliché of hope: the orphaned baby left in a basket on a doorstep.