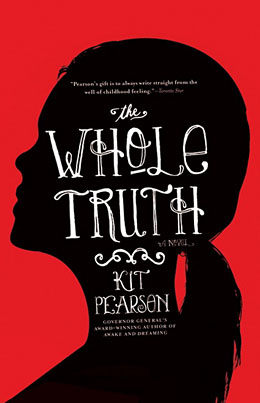 THE WHOLE TRUTH
by Kit Pearson

As Kit Pearson’s Depression-era novel begins, Polly and Maud are newly orphaned. Their father has just drowned, and their mother died before nine-year-old Polly was old enough to remember her. The two are now travelling by train from Winnipeg to B.C., where they will live with relatives on an island situated between Vancouver and Victoria. Although Polly and Maud have never met them, their new family welcomes them with open arms.

Polly’s heavy heart is made heavier still by the dark secret she must keep from everyone, including her relatives: her father is really alive. Falsely accused of stealing money, he staged his death to spare the girls the shame of his going to jail. But is their father’s story true? During her first two years on the island, devoted Polly never questions it. Later, when Maud begins to express doubts about their father’s innocence, Polly is shattered.

Pearson, author of A Perfect Gentle Knight and the award-winning Guests of War series, offers lively characters and a rich depiction of life on the island, her prose echoing the quaint sensibilities of the novel’s 1930s setting. Though initially shy, Polly comes to love her new life. Yet things are not always easy, as she makes clear in unsent letters to her father. Polly struggles with a bully at her school, with whether she should eat meat, and with Maud finding Jesus while at boarding school in Victoria. More disturbing still, Polly’s well-to-do grandmother is accused of racism by some of the island parents.

With all the important characters in The Whole Truth undergoing some kind of transformation or struggle with the truth, Pearson encourages her readers to try to see them in shades of grey rather than black and white. Although the novel seems aimed at a younger teen readership, the hardearned but simple lesson Polly learns is of value to readers of any age: people are complex; they can and do change.

Comments: Comments Off on THE WHOLE TRUTH
by Kit Pearson Posted by: admin Categories: Adult Fiction, Reviews Tags: boarding school, lively characters, Quill and Quire, travelling by train, unsent letters, vancouver and victoria
← THERE BUT FOR THE
by Ali Smith
THE LEFTOVERS
by Tom Perrotta →