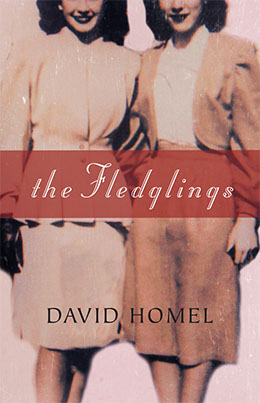 THE FLEDGLINGS
by David Homel

David Homel’s new novel is a story-within-a-story whose frame hangs on Joey Krueger, an ex-architect living in Connecticut who’s made a fortune with a series of businesses preying on peoples’ fears of environmental catastrophe.

He’s had less success with his two marriages. Joey’s first wife left him after he hit her during an argument about the children she was denying him through her “willful sterility.” Now Elke, his second, has insisted on separate rooms because of what she considers his excessive devotion to his 80-year-old mother, Bluma.

In addition to dyeing his hair purple and embarking on an impulsive affair with his married next-door neighbour, Caroline, Joey has decided to tackle the ennui of middle age by writing Bluma’s life story. “What did he know of his family story? There was a bad man, his father, who was bad in an ordinary way, and a good woman, his mother, who was extraordinarily good.” The question is in a series of narratorial paradoxes, one perhaps best answered with more questions; namely, How could a middle-aged only child who adores his mother be so uncurious about her past? And if he knows so little, on what does he base the notion that her story is so worthwhile and fascinating?

Comments: Comments Off on THE FLEDGLINGS
by David Homel Posted by: admin Categories: Adult Fiction, Reviews Tags: Fiction, National Post
← THE TEMPORARY GENTLEMAN
by Sebastian Barry
IN THE SLENDER MARGIN
by Eve Joseph →