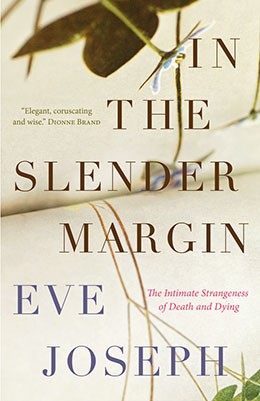 IN THE SLENDER MARGIN
by Eve Joseph

In 1964, when Eve Joseph was eleven, her older brother Ian died in a car accident. Ian’s death, Joseph writes, swung open the door to the underworld and entered her and her mother, “like a permanent vibration.” 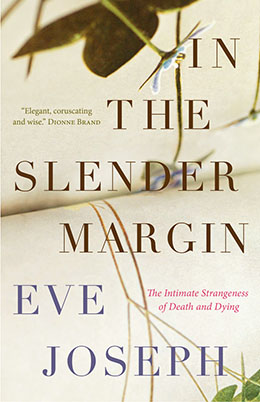 Unlike Joan Didion’s memoir about her husband’s death, The Year of Magical Thinking, Joseph’s book about death and dying wasn’t written in the bewildering throes of grief, but it nevertheless shares the latter’s persistent, circular probing, its deadpan humour and stylistic restraint. As a fluidly ranging miscellany of facts, poetry, history, mythology and memoir, In The Slender Margin also calls to mind Julian Barnes’ book about his fear of death, Nothing to Be Frightened Of (a work tragically and ironically overshadowed by his wife’s sudden death shortly after its publication), although Joseph’s tone tends to be warmer, less coolly erudite than Barnes’.

A poet raised in North Vancouver, Joseph trained as a social worker before she began working in Canada’s nascent hospice system in the mid-1980s, where she stayed for over twenty years. Getting into the “death business” seemed practical at the time: the Victoria hospice Joseph applied to, she notes, was close enough that she could walk home for lunch. Later, she would come to see her career move as an attempt gain intimacy with her brother by gaining intimacy with death itself.

In the West, medical advances and the rise of the funeral industry have, over the past century, profoundly changed the way we view—or don’t view—death. The work of handling dead and dying bodies has passed from families to “intimate strangers” whose goal is the “good death”: one free of pain and over which a degree of control can be exercised. The decline of religion and its attendant rituals, meanwhile, has left many of us at a loss when it comes to burying and mourning our loved ones.

In the sixties, Elisabeth Kübler-Ross’s five stages of grief offered people a new language for talking about death. Useful as that model has been, anyone who’s ever grieved knows how non-linear and surreal the experience can be: “There is no road map for the dying or the bereaved,” writes Joseph, “Grief is a mess.”

People often make comparisons between the process of dying and that of being born. In hospice, Joseph found they also shared a common language. Like birth, dying has its stages of breathing, transition, its own hard labour.

The interconnections between death, language and art are central to In the Slender Margin, which was born out of a discussion Joseph had with the late poet P. K. Page about how metaphors function as both the “engine of poetry” and the language of the dying. Its title comes from a quote by the 17th century Japanese dramatist Chikamatsu Monzaemon: “Art is something that lies in the slender margin between the real and the unreal.” The same slender margin, Joseph believes, that the dying inhabit.

Language has the power “to unlock the dying process,” as when the living give the dying verbal permission to leave them. Unlike euphemisms, which tend to avert our gaze from death, metaphors can also be powerful tools for the dying. Joseph found these often focussed on the idea of travel: “The language of dying is not static; it is a language of movement, of platforms, tickets, passports and maps, visitations and greetings, entrances and exits.”

Metaphorically speaking, those who live on the margins are sometimes the most at ease in “death’s house.” When her cousin’s six-year-old son was dying of cancer, Joseph recalls how the boy’s junkie biker aunt arrived on her motorcycle at midnight and proceeded to cuddle her nephew until he died. Humbled and amazed, Joseph spent years trying to emulate this brave intimacy with her hospice patients.

Each of the wonderfully specific tales in this book feels like an antidote to the familiar Hallmark clichés about death and loss. Some read like fables: A man who built a farmer’s market on his property so his family would have a means of earning a living after he died asked Joseph if she would bake loaves for them to sell. Though she initially did so as a favour, selling the loaves became, for a time, Joseph’s main source of income when her marriage ended.

My sister died of cancer in a Guelph hospice in mid-April, so I approached In the Slender Margin with some trepidation. But while some parts resonated with greater force than might normally have been the case, I found it neither grim nor depressing; quite the contrary. In many ways the experience of reading it mimicked grief’s rollercoaster: weeping jags offset by practical accounting, flights of poetry by useful facts and history.

We’re used to grief counselors on television bandying about the term “closure.” But if, as  Joseph says “We are not separate form the dead—we carry them with us” it’s perhaps reasonable to ask if such a thing is really possible, or even desirable. I can’t help wondering too if this somehow relates to our natural aversion to stories that are too “neat,” that try to hand us all the answers.

In the Slender Margin is intended as an exploration rather than a balm or solace, though it will no doubt be those things for some people. Its resonance comes, rather, from its intelligent open-endedness, its unflinching, simultaneous embrace of death’s reality and persistent mystery.

Comments: Comments Off on IN THE SLENDER MARGIN
by Eve Joseph Posted by: admin Categories: Adult Non-fiction, Reviews Tags: Globe and Mail, Non-fiction
← THE FLEDGLINGS
by David Homel
SMOKE RIVER
by Krista Foss →