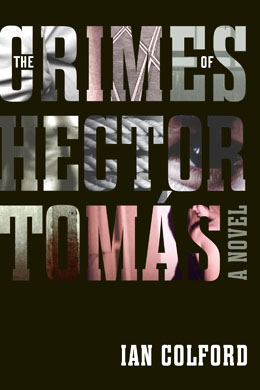 THE CRIMES OF HECTOR TOMÁS
by Ian Colford

In his two books, Halifax native Ian Colford has made a habit of embracing vagueness. Evidence, his well-received 2008 collection of inter-connected short stories, was set in an unspecified “province,” while the tales themselves were narrated by a refugee of indeterminate Eastern European origin.

Colford’s novelistic debut takes place, similarly, in a generic South American country subject to many of the problems—military coups, tortured or “disappeared” citizens, shady arms deals with Americans, oppression of indigenous peoples—that have historically plagued that part of the world. The novel centres on the ill-fated Tomás family, who live in an apartment building in the provincial capital that, in the manner of early novels, is coyly referred to as B____.

In combination with Colford’s disarmingly formal style, these quirks initially evoke the feel of a 19th century European novel. Colford seems to play to this in his descriptions of the family patriarch, Enrique Tomás, a self-absorbed pedant with a mysterious job at the university. Bespectacled, with a heavy black suit and pocket watch, Enrique fills his spare time scribbling “unfathomable dissections of the reality that the rest of us take for granted.”

Read the full review at the National Post’s Website:
http://arts.nationalpost.com/…the-crimes-of-hector-tomas/