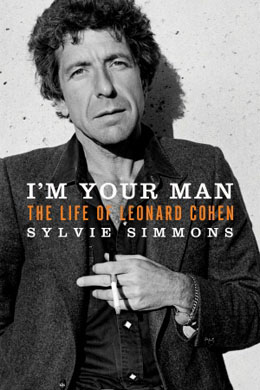 I’M YOUR MAN:
The Life of Leonard Cohen
by Sylvie Simmons

Like laurel leaves on a video jacket, nothing lends legitimacy to a biography like the adjectives “authorized” and “definitive.” Of the dozen or so biographies written about Leonard Cohen over the years, none is authorized; “definitive” has gone, by default, to Ira B. Nadel’s informative but flawed Various Positions: A Life of Leonard Cohen from 1996 (reissued in 2006). That flickering torch is now getting passed in a hurry to veteran music journalist Sylvie Simmons, who’d better mind she doesn’t burn her hand in the process.

That Leonard Cohen is a revered figure in Canadian—scratch that—global arts and letters is something of an understatement. But although Cohen’s early poetry was well received at home, his novels and music were always more readily embraced overseas than they were in Canada, and especially the U.S., where he was virtually ignored for decades. The seemingly endless string of awards and honours bestowed on Cohen in North America over the last decade alone will presumably more than make up for these initial slights.

The well-publicized scandal that saw Cohen’s fortune decimated by his once-trusted manager Kelley Lynch forced him to hit the road hard in his 70s. The touring not only put him back in the black, it also brought him some of the best notices and most adoring audiences of his career. Almost at the same time, Cohen was thrust into the consciousness of the American Idol generation when various covers of his 1984 song “Hallelujah” suddenly started topping the charts. 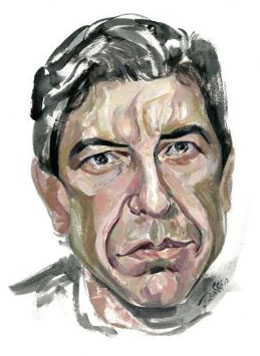 As Simmons shows, it’s not just his rare, late career triumphs that make Cohen’s life remarkable. Cohen has always been a truth seeker with a tendency to flee from his successes—whether they be with poetry, music, women or religion—which he did by moving restlessly around the globe and between his homes in Greece, Montreal and L.A. “There seemed to be a deep need in Leonard for self-abnegation, self-control and hunger” Simmons writes. Cohen also suffered depression, which he dealt with in the early days through copious drug and alcohol use (he performed many concerts on LSD). Later, he famously spent five years as a Buddhist monk, a practice he found complimentary to his native Judaism.

Simmons’ writing can lack polish (“His words had the dark humour of both loneliness and honesty”), and she makes a careless error in the book’s second paragraph when she describes the Royal Victoria Hospital, where Cohen was born, as being in Westmount instead of Montreal. I never got comfortable with her referring to her subject as “Leonard” (with others, she switches between first and last names), which feels at odds with the suave formality Cohen has always projected in manner and dress and that made him stand out in the shaggy 60s and 70s.

But it’s also a voice that grows on you, and by and large Simmons toes a careful line between observation and exegesis. I’m Your Man certainly impresses with its thoroughness. Simmons carefully footnotes the over 100 interviews (including with Cohen himself) and legion archival and secondary sources she consulted. Paired with the book’s sheer heft, Simmons’ assiduous research easily earns her work the “definitive” label.

It’s testament to Cohen’s enduring charm that, despite a provocative body of work and a personal life lousy with affairs, he has so few detractors (one-time paramour Joni Mitchell fell into this camp, but seems to have softened her position over the years).

I think it reasonable to say that if this book didn’t get authorized then no biography of Cohen ever will. Ira Nadel says that when he asked Cohen if he could call his own book authorized Cohen paused before Cohenesquely replying, “tolerated.” He qualified this a short minute later: “benignly tolerated.”

Comments: Comments Off on I’M YOUR MAN:
The Life of Leonard Cohen
by Sylvie Simmons Posted by: admin Categories: Adult Non-fiction, Reviews Tags: Reviews, Toronto Star
← THE CRIMES OF HECTOR TOMÁS
by Ian Colford
THE PURCHASE
by Linda Spalding →