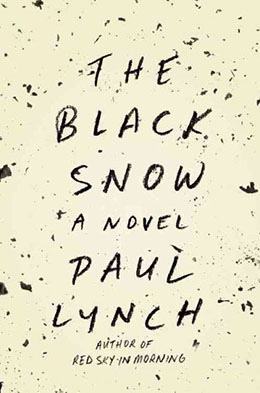 THE BLACK SNOW
by Paul Lynch

Paul Lynch’s The Black Snow is, like its predecessor, Red Sky in Morning, a fierce and stunning novel written in chiaroscuro; its darkness always threatening to absorb its light. The Irish author’s gnarled, lustrous prose style is peppered with local vernacular; his literary sensibility an ornate version of the American Gothic of McCarthy and Faulkner. Throw in an elastic attitude to grammar and all of this has a thrillingly defamiliarizing effect: though he’s writing in English, Lynch makes you feel like you’ve magically acquired the ability to understand a foreign language.

The Black Snow is set in 1945. But it is Ireland, so the war is happening offstage; the barbarism Lynch wants to explore, at any rate, is of a more intimate kind. Born in Donegal, Barnabas Kane was sent to America to be raised by relatives after he was orphaned as a child. Fearless and resourceful, he would later build Manhattan’s skyscrapers alongside the Mohawk, whose way of talking about their ancestral home induced in him a yearning for his own.

When he returned to his birthplace to farm, he brought with him his American-by-birth, Irish-by-blood wife Eskra, who perceived her new home as “wild and poor, a vision darker than the dream spun by her emigrant parents,” and their infant son Billy. For Barnabas and Eskra, the move wasn’t a migration but a homecoming.

That their neighbours don’t share this view only becomes apparent after the novel’s dramatic opening event: a massive fire that destroys Barnabas’ byre along with his entire herd of cattle and his farmhand, Matthew Peoples.

Devastated, Barnabas resolves to rebuild the byre. With no source of income and no insurance, he turns to his neighbours for help—most had run to his succor during the fire—but like a series of little red hens, each politely refuses him in turn. One makes no secret of coveting Barnabas’ now-empty fields.

Barnabas catches wind of rumours suggesting that a number of townsfolk hold him responsible for Matthew Peoples’ death. Indeed, after Esker receives a visit from the latter’s bitter, angry widow, strange things start to happen: sheets go missing off the clothesline, the horse falls ill, her honeybees suddenly die en masse. But the crime that Barnabas seems to be most guilty of is being an outsider; Esker, with her foreign accent and habits, even more so.

Lurking around the narrative’s periphery is teenaged Billy, whom we hear from directly only through a series of journal entries. These allude to a secret burden, one tied to his exploits with an unstable local boy who is later committed to the asylum.

Both of Lynch’s novels tap into that stalwart theme of Irish literature, banishment and exile, symbolized here by the cold cups of tea Barnabas continually finds himself drinking. But The Black Snow is also about the tribalism and xenophobia of a backwards- and inwards-looking society—a topic with clear relevance to the modern global rise of anti-immigration sentiment. When Barnabas, while scavenging for stone for his byre, dismantles the walls of two century-old abandoned famine houses, his bible-thumping neighbour accuses him of theft and desecration: he would rather the walls stand as mouldering monuments to families long dead than be used as a lifeline to a living, struggling one.

Lynch’s writing is so stuffed with metaphor and simile (he gives Canadian teenagers a run for their money in his use of “like,” the difference being that he uses the term for comparative purposes) that we effectively get two narratives: the story, and its imagistic twin. In his characters and situations, however, Lynch is clearly striving towards the archetypal and the mythic: one of several ways to look at Barnabas is as a mid-twentieth century Odysseus returned to his Ithaca. He even has a one-eyed dog called Cyclop.

A high school English class would classify The Black Snow’s central conflict as man against society; its central tragedy comes from the fact that the society its man is in conflict with is his own.

Comments: Comments Off on THE BLACK SNOW
by Paul Lynch Posted by: admin Categories: Adult Fiction, Reviews Tags: Fiction, Toronto Star
← THEATRE OF THE UNIMPRESSED
by Jordan Tannahill
THIS IS HAPPY
by Camilla Gibb →