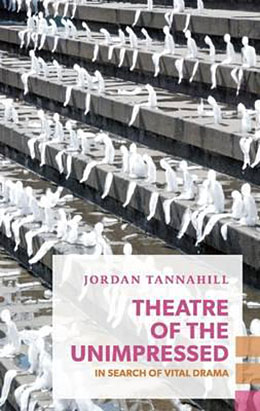 THEATRE OF THE UNIMPRESSED
by Jordan Tannahill

His choice of analogy suggests that Tannahill has a lower tolerance for boredom than many of us do. The deadpan sincerity with which he delivers it makes it difficult not to like him, or to want to hear what he has to say, even if your relationship with theatre has, like mine over the years, run the gamut from fist-pumping enthusiasm to outright indifference.

Twenty-seven-year-old Tannahill is a Governor General’s Award-winning playwright and theatre director who co-runs, with his ex-boyfriend, William Ellis, the experimental performance space Videofag out of a tiny storefront in Toronto’s Kensington Market. Tannahill quite literally lives and breathes theatre: Videofag is also his and Ellis’ home. “It’s not unusual for Will and I to emerge from the shower in towels to finds a cluster of actors making tea for their rehearsal, or doing a wig-fitting in our bedroom, or running lines on our couch,” he writes with barely contained pride.

In getting to the root of why theatre so often defaults to the lackluster, Tannahill combines his personal observations with a series of informal interviews he conducted over the course of a year with people connected, in various capacities and countries, to theatre. Instead of spending his time finger pointing—who really needs to be reminded what a bad play looks like?—he focuses on tangibles. Theatre’s endemic risk-aversion has, in Tannahill’s view, many graspable causes, from subscriber-based models that frown on experimentation to audiences that are disproportionately Caucasian, middle-aged and middle-class, to the necessity of getting bums in seats to pay venues’ heating bills. By way of counterpoint, Tannahill peppers the book with fascinating, detailed examples of recent theatre that has successfully and inspiringly defied genre and convention.

Though dullness is a blight to which no art is immune, Tannahill argues plausibly that people are less likely to return to the theatre after a bad experience than to a concert hall or art gallery. Many factors make theatre unique, including, alas, the suffocating sense of entrapment one feels while enduring a terrible play; a feeling heightened by the knowledge that one can only extract oneself through a showy disruption of both audience and performers. And where technology gives us regular access to the world’s best film, art and music, what theatre we see is necessarily limited to the offerings of local practitioners, only a fraction of which will be, Tannahill notes, of international calibre.

Theatre’s refusal to countenance the possibility of failure has ensured the ongoing primacy of the so-called Well-Made Play, whose predictable, realist formula was developed by the French playwright Eugène Scribe, who sounds like a kind of 18th century Aaron Spelling. Epitomized by crowd-pleasers like Driving Miss Daisy, the Well-Made Play is, in Tannahill’s words, one “in which nothing surprising can occur because its intent is so legible.”

Just as the invention of photography brought the need for high realism in painting into question, the advent of screen-based mediums, with their unparalleled ability to perform close-ups and establish setting, should have freed theatre from the slavish need for verisimilitude, yet the standard realist approach in theatre persists.

Surely the most remarkable example of a once-insipid entertainment medium reinventing itself is one of the most accessible: television. Had you told someone watching the “idiot tube” in the 1970s and 80s, when it was at its most abjectly formulaic, that it would one day assume the patina of high art, he or she would have laughed to the end of the next commercial break. If having cable can lose its stigma, Tannahill is surely justified in expecting that new and vital life can be breathed back into one of the most enduring and protean of art forms.

Comments: Comments Off on THEATRE OF THE UNIMPRESSED
by Jordan Tannahill Posted by: admin Categories: Adult Non-fiction, Reviews Tags: Non-fiction, Toronto Star
← THE RIGHT TO BE COLD
by Sheila Watt-Cloutier
THE BLACK SNOW
by Paul Lynch →