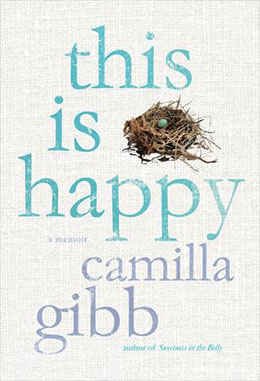 THIS IS HAPPY
by Camilla Gibb

Judged by its title alone, you might take Camilla Gibb’s memoir to be a Pollyannaish portrait of a successful author in mid-career. And with four well-received novels (including The Beauty of Humanity Movement and Sweetness in the Belly), a professorship at U of T, and a young daughter, Gibb would seem, outwardly at least, to have much to be happy about. Yet undermining the title’s seeming declarativeness is a conspicuous use of lower-case type and lack of punctuation on the cover—it is not This is Happy? or, This! Is! Happy!—which, combined, suggest that Gibb’s happiness, while nominally achieved, is mitigated by something.

That something was the devastating, out-of-the-blue announcement in the late aughts, when Gibb was forty-one and newly pregnant with her daughter, that her wife Anna (a pseudonym for CBC’s VP of English Services Heather Conway) was leaving her after almost a decade. Gibb would not only have to face pregnancy and birth alone, but also the daunting prospect of single motherhood. Ending the pregnancy was considered then dismissed on the grounds that, without the child, Gibb might have nothing to live for.

Incessantly weeping, Gibb buys a Victorian semi in Toronto’s east end and embarks on renovations so extensive she has to sleep, for a time, on a mattress in the hallway. Taken in isolation, that fact might stretch some people’s empathic limits: after all, lots of single mothers have more to worry about than the placement of their backyard water feature. But the broadly stroked autobiography that precedes this complaint disabuses us of any illusion that Gibb—whose family came to Canada from England when she was a preschooler—is to the manor born.

Gibb’s childhood was dominated by her cruel and erratic father, who lost his career in the British military for making a racist slur against a black superior. In Canada, his “beliefs about race, class, women and children just became more entrenched. And more obviously peculiar.” That he took considerable pride in a psychiatrist’s diagnosis that he was “an egomaniac without empathy or regard for others,” would seem to demonstrate the psychiatrist’s point. Gibb describes her mother, conversely, as a “steel trap,” a quality that made her ideal for the work she did for MI5 in England, less so for parenting.

After her parents divorced, Gibb’s father descended into alcoholism, mental illness, and eventually, homelessness. Sent to live with him on his derelict farm, Gibb’s older brother Micah began, in his teens, a lifelong battle with drug addiction.

That Gibb herself had bipolar disorder only came to light when she was doing her PhD (in social anthropology) at Oxford, where dark thoughts culminated in a couple of suicide attempts and hospitalizations. Gibb’s unhappiness manifested itself in her relationships, which consisted of random sex interspersed with a series of dead-end affairs including, during her fieldwork in Ethiopia, a local Muslim doctor; an ethical breach for her, a cultural one for him.

The stability of her marriage had kept her depression at bay, so on the eve of her due date Gibb goes about assembling a kind of family. It is a heterodox one, based on blood, social engineering and money. After a fourteen-year estrangement Micah reappears, sober, and builds Gibb a deck. A graduate student from the Maritimes, Melissa, whom friends had tried to set her up with becomes, instead, a friend and playmate to her daughter. And then there is lovely Tita, Gibb’s live-in Filipinna nanny.

Its raw, at times almost desperate, codependence makes the friendship that develops between Gibb and Tita the book’s most moving aspect. At one point, Gibb’s inquiry about a lost necklace is taken by Tita as an accusation—her reaction an awkward reminder, for both women, of the transactional roots of their alliance. Fences, though, are poignantly mended. Later, when Tita’s husband comes to Canada, the couple ends up living in Gibb’s basement with their baby.

Gibb’s writing is laser-like, spare—the latter achieved by omitting much of the detail typically found in memoirs (her daughter’s name, her source of income after the split). Though a memoir is necessarily one individual’s point of view, the spirit of this one is collectivist: Gibb is “saved” not by the flamboyant discovery of untapped inner reserves, but rather by the mentally salubrious effects of companionship.