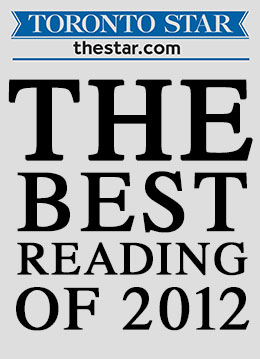 THE BEST READING OF 2012
By Emily Donaldson and Alex Good

If “Canada by Richard Ford” were a designer cologne, it would smell like haplessness and desperation mixed with a handful of Saskatchewan soil. Set in the 1960s, this novel about a teen from Montana who flees to Canada after his parents are jailed for a bank robbery gone awry bears all the subtle, aching virtuosity of Ford’s best work. —Emily Donaldson

This isn’t the best written memoir you’ll ever read, but I challenge you to find one that’s as authentic, unfiltered and idiosyncratic. Those hoping for a soak in the nostalgia-tub won’t be disappointed: Young has anecdotes aplenty about his ’60s and ’70s heyday. What surprises is how much his passionate focus on his entrepreneurial pursuits—which include a zero-emissions car and a near master-quality digital music player—reveals a rock icon determined to live so squarely in the future. —Emily Donaldson

Unaccountably overlooked by this year’s prize juries, Anakana Schofield’s ribald story of an Irish farmwife’s descent into late-life cougardom and mental breakdown is a standout debut and one of the best Canadian novels of the year: the sort of book that forces you to read it over again as soon as you finish. —Alex Good

This year’s entry in The Great American Novel sweepstakes was first published in 2008 in a limited edition that was discovered by a handful of perceptive reviewers. The story of a Brooklyn public defender who gets caught up in crazy plots and schemes, it’s a comic epic carried along on a raging torrent of voices and people who can’t stop talking even when no one is listening to them. —Alex Good

You really can’t go wrong with the Tudors and with the second instalment of her Thomas Cromwell trilogy, Hilary Mantel doesn’t miss a step (both this book and its predecessor Wolf Hall won the Man Booker Prize). —Alex Good

When it comes to that trifecta of discontent — race, class and gender — Smith shops locally. This study of four characters who grew up on a London housing estate revisits the scene of the author’s much admired but millstone-like first novel White Teeth with seasoned narrative economy. Smith has a mimic’s ear for rhythm and dialect that helps make this her best novel to date. —Emily Donaldson

Rawi Hage’s third novel introduces us to the surreal urban fantasy world of a bibliophile, auto-erotic taxi driver and son of the circus named Fly. A highly personal vision soaked in race, sex, religion, and revolution, Carnival tosses plot to the side and takes us on a spellbinding imaginative trip. —Alex Good

When I told a reviewer friend I planned to omit Munro from this list on the grounds that her work was too predictably good, he argued I was punishing her for being brilliant. I concede the point. Read these (predictably) genius stories and celebrate the fact that there’s a third certain thing in this world that doesn’t involve funerals or sorting receipts. —Emily Donaldson

This alternate-history steampunk adventure tale is pure reading pleasure from cover to cover. The plot involves a humble clock repairman named Joe Spork who is drawn into a global conspiracy headed by the deathless Opium Khan Shem Shem Tsien and his army of hand-crafted automatons. Can Joe save the world from a metaphysical doomsday device that’s about to be activated by a swarm of mechanical bees? It’s a tall order, but as the plot corkscrews zanily to its conclusion we soon realize this is no ordinary Joe. —Alex Good

Clocking in at nearly 1,000 pages, this encyclopedic work documenting the many ways parents love, or try to love, children with challenges ranging from dwarfism to autism to transgenderism posits author Andrew Solomon as a kind of Diderot of Difference. Technically this is a compendium, but the startling uniqueness of each heart wrenching case makes the word “treasury” seem more apropos. —Emily Donaldson

The concept of 13 linked stories, whose events relate directly and indirectly to the 1944 siege of Budapest, allows Tamas Dobozy to explore themes of generational conflict, moral compromise, and history vs. memory from various different angles in this intricate and controlled collection. Dobozy mines the confessional mode with skill, digging at the past to uncover the ways we write and rewrite history. —Alex Good

Why does Canada produce so many great short story writers? For the record here’s another. Alice Petersen’s first collection reads like the work of someone who is already a master of the form, her writing dense with understatement, subtlety and ambiguity. —Alex Good

This exquisite, ruminative book is something W.G. Sebald might have written had he been, like Shapton, an elite competitive swimmer in Mississauga in the 1980s and early ’90s. Interlaced with Shapton’s impressionistic watercolours of swimmers and pool bottoms and a photo-history of her bathing suits, this is neither a sports memoir nor an extended metaphor for life, but her egoless probing is quietly compelling. —Emily Donaldson

If you’re only going to read one book all year, why not make it a book that will take you all year to read? From Kafka to King and beyond there’s a stacked lineup representing the best “strange and dark” writing from the past century in these 1,000-plus double-columned pages. —Alex Good

Regeneration-trilogy author Barker continues to prove herself one of the great novelists of the Great War in this follow-up to 2007’s Life Class. This one is built around the absence of its troubled, eponymous character. Elinor, a painter obsessed with the fate of her war medic brother Toby, takes a job illustrating wounded soldiers’ facial deformities with the (real) artist/surgeon Henry Tonks. —Emily Donaldson

In his just published study Comics Versus Art, University of Calgary professor Bart Beaty declares Chris Ware “the most influential American cartoonist to have arrived on the scene in the past 20 years.” You could argue with that high assessment, but there’s no denying that this comic-in-a-box takes us outside the box when it comes to what comics can be. The story of a Chicago woman told in fragments that can be read in any order, it’s a compelling collage of contemporary American life. —Alex Good

By turns indignant, phlegmatic, anecdotal and funny, this short but wide-ranging survey of native/white relations in North America by novelist andDead Dog Café Comedy Hour creator King is a must-read for anyone seeking the long view on the topic. King says his book isn’t history so much as storytelling “fraught with history,” but there’s no dearth of facts and examples to back up his often-withering critiques. —Emily Donaldson

David Foster Wallace took a dim view of author bios, but what makes this one fascinating is that it’s a portrait of a contemporary writer. In Wallace, who committed suicide in 2008, we see an artist coping (and not coping) with addiction, media saturation, information overload, flash fame and the hyper-accelerated culture of the Internet. —Alex Good

Unpleasantness abounds in this caustic, entertaining ode to family disunity by the author of The Curious Incident of the Dog in the Night-Time. Richard, a wealthy doctor, invites his estranged sister’s family to join his own for the weekend at a holiday house on the Welsh border. Haddon tightly winds up his eight characters then sits back to revel in what he has wrought. —Emily Donaldson

Comments: Comments Off on THE BEST READING OF 2012
By Emily Donaldson and Alex Good Posted by: admin Categories: Other Writing Tags: Other Writing, Toronto Star
← THE WORLD UNTIL YESTERDAY:
What Can We Learn from Traditional Societies?
by Jared Diamond
THE INCONVENIENT INDIAN:
A Curious Account of Native People in North America
by Thomas King →