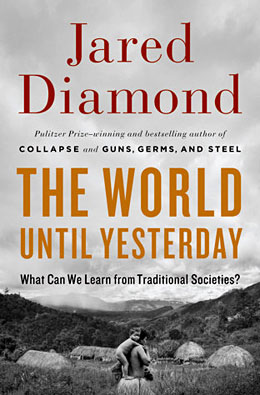 THE WORLD UNTIL YESTERDAY:
What Can We Learn from Traditional Societies?
by Jared Diamond

As members of what social scientists refer to as WEIRD (Western, educated, industrialized, rich, democratic) society, we tend to have conflicting attitudes to traditional societies, alternately romanticizing them for an imagined oneness with nature or else condemning them for the superstitions that have hampered their material progress.

Geographer Jared Diamond makes the case that while there are reasons aplenty to be thankful for our mod cons, there also are many practical lessons to be gleaned from the dozens of traditional societies that still dot the globe from New Guinea to Africa to Alaska.

When we talk about traditional societies we’re really referring to the “before” shot in our evolutionary profile. “All human societies have been traditional for far longer than any society has been modern,” Diamond writes. The “yesterday” of the book’s title, ergo, refers to the tiny fraction of our six million year history—the 11,000 years since the last Ice Age—in which Eurasian society has not formed part of the hunter-gatherer groups that once dominated the planet.

The World Until Yesterday extends the thesis Diamond put forth in his Pulitzer Prize-winning Guns, Germs, and Steel (1997); namely, that the rise of Eurasian civilization and hegemony had less to do with innate ingenuity than it did with winning the geographical lottery in the form of a forgiving environment conducive to agriculture and therefore the modern state. Diamond sees most traditional practices, religion included, as based on pragmatic responses to the immediate environment. Hunter-gatherers, for instance, who must keep moving or else starve, may leave their elderly to die; groups who live in regions with unpredictable resource fluctuations often have more flexible attitudes to territorial boundaries.

Diamond compares modern and traditional societies based on criteria including war, child rearing, treatment of elders, attitudes to risk, religion, language and health. The discussion has a more personal tone than in Diamond’s other books, much of it reflecting his 50 years working amongst various tribes and bands in New Guinea—home to a disproportionate number of the world’s languages and traditional societies.

Given current, testy debates about what constitutes “natural” child-rearing, Diamond’s chapter on the subject is particularly interesting. Those extolling the benefits of breastfeeding, carrying rather than strollering children, sharing a family bed and attending to their infant’s merest whimper can rest assured that their practices have enduring precedents. The same cohort may be less inclined to emulate those tribes who choose not to intervene when their children touch fires or suck on sharp knives (and whose adults bears the scars to prove it), however.

Our own cultural practices are similar to traditional ones in ways we might not expect. Traditional societies are often viewed as paragons of non-materialistic self-sufficiency; we assume they acquire only what they need. But acquiring goods for status or to cement alliances has been practiced for thousands of years. Africa’s !Kung people, for example, trade for clay pots or arrows they could easily make themselves—the same impulse, presumably, that causes us to shell out for tchotchkes at our neighbour’s craft sale.

Multilingualism, dispute resolution and parenting are all areas where Diamond feels select traditional practices could benefit modern society. When it comes to peace, however, the modern state would seem to have the upper hand. Where state warfare is intermittent, tribal warfare tends to be continuous, and when it has been forcibly stopped by colonial powers many tribespeople comment on their improved quality of life.

Other discussions, such as the detrimental effects of high-fat, high-salt Western diet, may feel a little familiar, yet they certainly have a place in this illuminating, ambitious book, whose impact ultimately comes from the grandness of its perspective.

Comments: Comments Off on THE WORLD UNTIL YESTERDAY:
What Can We Learn from Traditional Societies?
by Jared Diamond Posted by: admin Categories: Adult Non-fiction, Reviews Tags: Reviews, Toronto Star
← THE SILENT HOUSE
by Orhan Pamuk
THE BEST READING OF 2012
By Emily Donaldson and Alex Good →