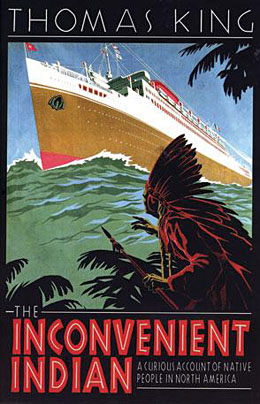 THE INCONVENIENT INDIAN:
A Curious Account of Native People in North America
by Thomas King

Novelist Thomas King describes his brilliantly insightful, peevish book about native people in North America as a “a series of conversations and arguments that I’ve been having with myself and others for most of my adult life.” Making no excuses for the intrusion of his own personal biases and the book’s lack of footnotes, King suggests we view The Inconvenient Indian not as history, but as storytelling “fraught with history.”

King never deigns to speak collectively for the hundreds of nations in both Canada and the U.S., noting that “there never was a collective to begin with.” He eschews the terms “Native American” and “First Nations” in favour of the less politically correct (and, historically, downright wrong) “Indian,” on the grounds that it remains, for better or worse, the North American default.

The book roams freely: King explores the alternately romanticized and demonized image of the Indian in popular culture, examines various attempts at cultural assimilation (including residential schools), and reveals enduring hypocrisies in the attitudes of whites toward Indians. From the Trail of Tears to Ipperwash, land has been the crucible of the relationship between natives and non-natives. Accordingly, King spends considerable time detailing the many ways – racist laws, broken treaties, forcible removal – Indians have been swindled out of land that was rightfully theirs.

Personal experience is often injected into the mix, much of it tinged with King’s trademark humour, and he is often critical of the decisions natives make about their lives. He concedes that casinos aren’t the ideal solution to Indians’ economic woes but argues that, for now at least, gaming “holds the most potential for the least effort.” Humour aside, this is an unflinching, occasionally fierce work. Natives are often chided for dwelling too much on the past, yet if this book proves anything, it’s that it behooves all of us to do a lot more of exactly that.