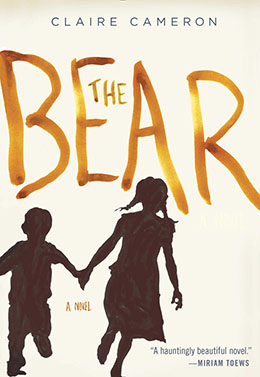 THE BEAR
by Claire Cameron

Claire Cameron’s second novel builds on the true case of a couple who were mauled and partially eaten by a black bear while camping in Ontario’s Algonquin Park in 1991. The meal the couple had been preparing was found untouched, which chillingly confirmed what no one wants to believe about bears: that they can prey on humans for unfathomable reasons.

There are obvious limitations to a Bambi-Meets-Godzilla-style story that ends with the sudden demise of its unsuspecting protagonists, so Cameron gives her fictional couple two children—five-year-old Anna, our narrator, and two-year-old Alex, aka “Stick”—who survive the attack thanks to their father’s quick thinking when he pulls them from their tent and shuts them inside a cooler.

Key to Cameron’s strategy is the plausibility-straining notion that the children are unaware of their parents’ fate. The attack happens at night, so it’s heard rather than seen, and Anna’s acuity is dimmed by sleepiness.

When the children emerge from the cooler the next morning their father is gone. Their mother, who lies paralyzed and bloodied in some nearby plants, summons her last breaths to instruct Anna to get herself and Stick off the island. She will, she promises, meet them “later.” Anna hand-paddles their canoe to the mainland where the pair spend a chilly and, in Stick’s case, pants-less night before being discovered by park rangers.

Its narrator’s youth makes The Bear a novel of inferences. We know, for instance, that what Anna supposes to be a “big dog” sniffing her inside the cooler with “tomato juice” on its jaw, is not. We’re pretty sure too that it’s not a funny coincidence that her dad’s running shoe is attached to the “meat” the dog is lustily gnawing on.

On the mainland, the narrative turns increasingly inward as Anna attempts to make sense of her situation using analogies from her scant life experience. Cameron sometimes strikes poignancy here. The tree she and Alex shelter under is chosen for its resemblance to their fort at home; that she can see the sky through its needles is deemed acceptable because her blanket “had little holes too.” A recent recollection of her mother taking her and Stick to the cottage while her father remained dejectedly in the driveway cues us that her parents had not been getting along, and the book’s tragedy is thus further compounded by our realization that the camping trip represented a reconciliation.

As Cameron stretches the children’s obliviousness to its limits, however, technical issues set in. Having strenuously shielded them from the mauling, we sense that true desperation will be kept at bay, which means the potential for any real suspense post-attack is effectively gone.

Anna’s tendency to use words and discourse more sophisticated than one imagines she’d be capable of can jolt us out of the narrative. Her mistakes, moreover, aren’t consistent. She initially describes Alex’s cheeks, for instance, as having “two dots”; later, she casually uses the word “dimples.” She says “I get worried,” but also “I have worry”—which sounds more like something a French speaker learning English would say (j’ai peur). And would a child who mangles tenses like this: “I will drowned in the water if they don’t come get me soon” really be capable of a sentence as complex as “I feel fed up having to talk to babies”? Plunked within strings of short but watertight sentences, these “errors” too often seem like the equivalent of an adult mimicking a child’s script by writing with her weaker hand and reversing the odd letter.

Granting the reader greater access than the main character to what’s going on in a novel has become a tried-and-true technique. Six-year-old Maisie’s circumscribed awareness of her parents’ acrimonious divorce in Henry James’ What Maisie Knew—one of earliest (and best) novels written from a child’s perspective—is alluded to in the book’s very title.

But the novel that will pop most readily into peoples’ minds when reading The Bear is Emma Donoghue’s Room, whose narrator, five-year-old Jack, has been held captive with his mother since birth. Though my kids are older now, The Bear reminded me that listening to a kindergartner for sustained periods of time can be, to put it in the least curmudgeonly way possible, a numbing experience—there’s a reason why our love flows so freely when we gaze upon our children’s mutely angelic faces at night. The constant presence of adults in Room helped Donoghue minimize this problem through plenty of unfiltered adult dialogue. (Not one for limiting his vocabulary, James, needless to say, stuck to the third person.)

Some readers will be sufficiently charmed by Anna’s pragmatic pluck to overlook these issues (as most did with Donoghue’s Jack, whose language was also incongruous at times). Others will find that once they’ve glimpsed the marionette’s strings it’s hard to forget who’s holding them.

Comments: Comments Off on THE BEAR
by Claire Cameron Posted by: admin Categories: Adult Fiction, Reviews Tags: canadian novels, Fiction, Globe and Mail
← THE EYE OF THE DAY
by Dennison Smith
CADILLAC CATHEDRAL
by Jack Hodgins →