In his new novel, Jack Hodgins returns to the Vancouver Island community of Portuguese Creek that served as the setting for earlier books such as Broken Ground and Distance. Here, an unorthodox road trip is sparked by a combination of death and unrequited love, but despite the presence of unusual cars and a group of friends performing illegal activities, Cadillac Cathedral isn’t The Electric Kool-Aid Acid Test or even On the Road but rather a warm, gentle novel brimming with charcoal grey humour. 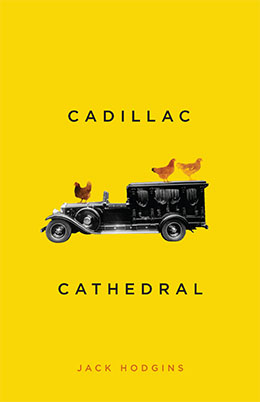 Arvo Saarikoski, a lifelong bachelor now in his seventies, is spending his retirement restoring cars out of his garage, where every week a motley assortment of regulars drop by to chat. One of them, Martin Glass, a local activist and one-time federal MP, has recently died. His friends know Martin would want to be buried at home, but with no family willing to arrange the transfer of his body from the city, they decide to step in and do it themselves.

When someone mentions a rare 1930s Cadillac hearse being sacrilegiously used to haul lumber by a local family, Arvo suggests reclaiming and restoring it so they can send Martin off in style. At the back of Arvo’s mind – but slowly creeping forward – is a more personal side benefit to this good deed. The hearse in question once belonged to the undertaker father of his childhood sweetheart, Myrtle Birdsong, and though it’s been decades since they’ve seen each other, the torch he holds for her still burns brightly (though not entirely convincingly). Collecting Martin’s body gives Arvo an excuse to drop in on Myrtle and potentially harness the nostalgia of her father’s hearse to revive her affections.

Arvo and the gang need to get to the city before the hospital takes matters into its own hands. But though their race against time is necessarily run at a snail’s pace—the unlicensed hearse is so slow it wouldn’t win a drag race with a tractor—the plot itself moves along at a decent clip. A variety of roadblocks are exploited, often successfully, for their comedic possibilities. In one of the novel’s funniest scenes, Arvo must chase down the hearse after it gets stolen from a motel parking lot by a family who want to use it for a not-quite-dead relative.

Though Hodgins reiterates Arvo’s dilemma for us a few more times than feels necessary, this is, overall, a sweet tale that often finds a Zen spot between funny and wistful.