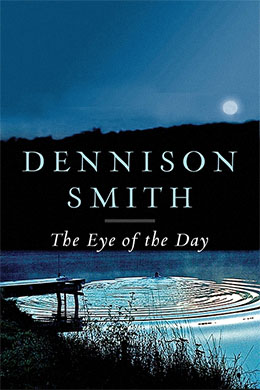 THE EYE OF THE DAY
by Dennison Smith

Dennison Smith’s restless second novel, The Eye of the Day, uses historic figures and a broad geographic canvas to tell the story of two characters poles apart class-wise who are brought together through a combination of personal, political and environmental tragedy.

In a Vermont rail yard in 1938, a locomotive explodes in a fireball, decapitating the conductor and sending a spike through the head of a local handyman named Amos Cobb. Though disfigured and blind in one eye, Amos survives.

In the yard that day is 11-year-old Aubrey Shaw, who knows Amos as the laconic, physically imposing caretaker of his well-to-do family’s summer cottage. Amos has always looked out for Aubrey; when, a year after the train accident, Greta Garbo takes up residence on their lake, Amos winkingly produces a camera before Aubrey rows out to spy on her.

But Aubrey’s annual summer idyll is about to come to an abrupt end. Later that season, Aubrey’s mother succumbs to a chronic heart condition and his bereaved father, a professor at Princeton, sends him to live with his tycoonish uncle who works for Standard Oil in Mexico City.

These dual events heighten the already stark differences between Amos and Aubrey’s lives; they also seem to propel them into ceaseless motion. With his fortunes now tied to the military-industrial complex, Aubrey roams the world by ship, plane and limousine with Uncle Jack and his glamorous, alcoholic wife Ethyl. In Berlin on the eve of war, the latter dine with Hitler (Standard Oil was notoriously accused of treason for assisting the Nazis). In Cuba, they hobnob with the massively wealthy and ruthless head of DuPont Chemical, Irénée du Pont.

Despite his privileged life, Aubrey’s sense of loneliness only deepens. For solace, he buries himself in photography and his uncommonly close relationship with his beautiful, tragic aunt.

Amos, meanwhile, abandons his pregnant wife and heads over the mountains on skis toward the Canadian border. Driven by instinct, he begins relentlessly spiking trees, his vague goal a kind of balancing of environmental accounts: “Amos couldn’t put coal or quartzite back in the ground. He was powerless to undo what was done, but he could spike trees.”

In a novel where each character, for better or worse, seems to represent a single impulse, it’s hard to fathom what role Smith envisaged for Amos’ vile wife Donna, who gives birth solo then leaves the child to die before running off in search of a Hollywood career (Smith follows her for a time then seems to lose interest). The horrifically bloody episode, seemingly performed out of spite for her husband, is oddly counterbalanced by the notion that Amos, though hundreds of kilometers away, instinctively knows he’s had a baby girl, but not that the child is dead.

Aubrey and Amos’ paths cross on two more occasions: once in an Alberta oil field, where Amos incites Jack’s enduring ire by nearly killing him with a pipe, and later during the war, on an Italian battlefield, where Aubrey is embedded as a reconnaissance photographer and Amos is on ski patrol.

Smith, who is also a poet, offers some precision-tooled prose, yet details that would help put flesh on characters’ bones or bolster plausibility are often lacking. The three cousins with whom Aubrey lives throughout his teens are, for instance, barely mentioned. And its unclear how Amos survives for months in the winter wilderness with only a rifle and axe. The endless calamities have a habit of piling up and even repeating themselves: on three occasions characters are saved from drowning in lakes or pools.

What Smith gives us lots of, literally and figuratively, is forest. What’s missing—ironically—are the trees.

Comments: Comments Off on THE EYE OF THE DAY
by Dennison Smith Posted by: admin Categories: Adult Fiction, Reviews Tags: Fiction, Toronto Star
← ALL THE RAGE
by A.L. Kennedy
THE BEAR
by Claire Cameron →