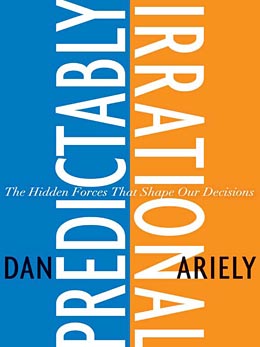 PREDICTABLY IRRATIONAL:
The Hidden Forces That Shape Our Decisions
by Dan Ariely

A graphic designer friend of mine routinely offers her clients three choices when doing a job, although in reality, only one of the designs — possibly two if she’s feeling especially creative — is meant for serious consideration. The “decoy” designs, on which, typically, very little time has been spent, serve two purposes: they make clients feel like they have a choice (thus allowing them to flex their all-important “creative input” muscle), but more importantly, the decoys offer a frame of reference against which the design the client was always meant to pick can be judged, thus allowing it’s undeniable virtues to shine through.

Dan Ariely, an Israeli-born professor of something called “behavioural economics” at MIT in Boston, begins his fascinating, sobering book with a basic observation about human nature: that most people — deprived of an intrinsic value meter — don’t know what they want unless they see it in context. Humans, it seems, are irrepressible relativists when it comes to determining the value of things. It’s the reason we tend to order the second most expensive dish on a menu, or the second least-expensive wine. Retail items on the extreme end of the price scale are often there for the same reason my friend does designs she doesn’t expect anyone to choose: because we tend to compare things that are easily comparable and avoid comparing things that cannot be compared easily. Ariely cites the case of high-end culinary retailer Williams-Sonoma, which, when it introduced its first bread-maker for $250, found that customers didn’t know how they should feel about the unfamiliar device. When a marketing research firm suggested offering a second, larger bread-maker at a 50 percent higher cost (a decoy), the cheaper bread-maker started flying off the shelves.

Ariely’s goal in Predictably Irrational is to debunk the assumption that we tend to behave rationally when confronted with choices in the marketplace (clearly he has never shopped with me). He points to fallacies behind the accepted economic notion of supply-and-demand, something he believes does not take into account the complex, random forces that conspire to have us to part with our hard-earned dollars.

In one of Ariely’s studies, MBA students were asked to write down the last two digits of their social security numbers at the top of a sheet of paper. They were then presented with a variety of consumer items and asked to write what they would be willing pay for them. Counter-intuitively, those with the highest social security numbers tended to bid the highest on all the items, while those with the lowest numbers — you guessed it — tended to low-ball. The experiment confirmed to Ariely the notion of price “anchors”: the first, but often arbitrary, price we encounter for an item that then becomes the mental benchmark by which we determine what we will pay for similar items in the future.

Which brings us, inevitably, to Starbucks, a business whose genius was to re-establish the price anchor for a familiar commodity into something far greater (read: exorbitant), by positioning itself in a unique category apart from its competitors. Once we have blithely shilled $3.50 for a grande, apparently, the relatively small move up to a $4.15 venti seems like chump change. At the point where re-mortgaging the house to keep us in lattes no longer seems unreasonable, supply-and-demand is suddenly turned on its head: “It seems then that instead of consumers’ willingness to pay influencing market prices, the causality is somewhat reversed and it is market prices themselves that influence consumers’ willingness to pay,” notes Ariely.

Predictably Irrational abounds with other eye-opening examples of irrational human behaviour. Ariely demonstrates the kryptonite-like pull of “free” goods by bartering chocolate bars with children trick-or-treating at his door. Their gormlessness is endearing, but adults apparently fare no better than your average five-year-old when it comes to their slavish desire to get something for nothing, even if the “something” we get is less than what we have, or worse, something we don’t need.

Another section on honesty offers disturbing evidence of our willingness to cheat when money is removed from the equation. A test group given the opportunity to cheat by freely helping themselves to a coin jar declined to do so, but another group happily fudged their results when the cash reward was mediated via a token system. It’s the same mentality that allows us to steal pens from our workplaces while leaving the petty cash drawer intact. It also has larger scale implications that will be obvious to anyone who regularly reads the Business section of any newspaper.

If Ariely can be faulted it’s for sometimes trying too hard to extrapolate useful moral lessons from his studies, as when he suggests that time spent comparing the fine points of digital camera models might have been better used capturing precious photographic memories now lost to the winds of time. But overall there is tremendous food for thought here with many pragmatic applications to help us become more self-aware social beings and less susceptible consumers.