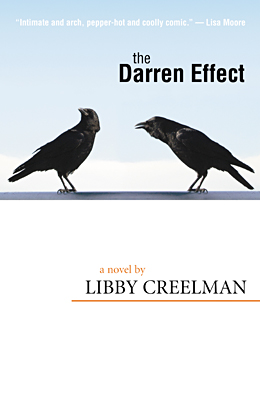 THE DARREN EFFECT
by Libby Creelman

Eight years after publishing a well-received book of short stories, Massachusetts-born, Newfoundland-based writer Libby Creelman has written a remarkably self-assured first novel with characters that must surely exist somewhere outside of its deftly written pages.

The situation here is emotionally fraught: Benny Martin is dying of cancer, leaving Heather Welbourne, a social worker, bereft and barely functioning. Heather is Benny’s lover of six years, which gives her mourning a problematic status: she must avoid Benny’s wife in the hospital corridor and will not be included in funeral arrangements. Unbeknownst to him, Heather is also pregnant with Benny’s child.

Heather’s mother and sister are both aware of her indiscretion and, since they live in a small town, it turns out that Benny’s wife, Isabella, knows about her husband’s duplicity, too. In the wake of Benny’s death, Isabella and her son move to a house across the road from Darren Foley, a biologist living with his mentally fragile sister. Darren befriends both Isabella and Heather, and unwittingly facilitates the collision of wife and mistress.

Creelman builds a kind of panopticon around each of her characters so finely faceted that we rarely get a chance to judge them before our perspective is forced to shift. Time and again, she denies us an opportunity to decisively focus our simmering contempt.

This is one of the few Newfoundland-set novels that resist the temptation to which so many writers fall prey: that of making the province and its much-ballyhooed charms a character – or a crutch, depending on your point of view – in the narrative. There are no salty dogs here, no lapses into dialect. For once, Newfoundland is just a place, which only adds to the novel’s interest.

No doubt The Darren Effect will garner Libby Creelman many well-deserved accolades. We can only hope she doesn’t wait another eight years for a follow-up.