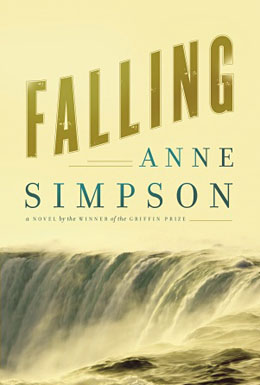 Falling opens with a tragic tableau that is the catalyst for this moving new novel by erstwhile Canadian poet Anne Simpson. Riding an ATV along a Nova Scotia beach, a teenaged girl, Lisa, is crushed under the weight of the vehicle after it overturns. Pinned in the sand, she drowns in just a few inches of water while her brother Damian — a young man with the remote beauty of a Greek god — dozes nearby. Her cry, we are told, “could have been that of an Arctic tern, high above, its wings an open pair of scissors against the blue.” Later, as Damian stares out the ambulance window that shuttles his sister’s lifeless body to hospital, there is a sense of inverted pathetic fallacy in the description of people going about their daily activities on a sun-drenched day, oblivious to the sudden snuffing out of life.

Facts quickly established, the novel then fast-forwards ten months: Damian and his mother Ingrid are making a pilgrimage to Ingrid’s hometown of Niagara Falls to scatter Lisa’s ashes. Lisa, we learn, had been obsessed with the place, but had never visited there.

Damian and Ingrid set up camp with Ingrid’s brother Roger and his adult autistic son, Elvis. Roger, a former daredevil who once plunged off the falls in barrels, is now blind. Vulnerability is pervasive in the novel, and the juxtaposition between Roger’s outlandish past and tenuous present is one of the more disquieting examples. Ingrid, still digesting Lisa’s death, finds her thoughts further muddied by the return to her childhood home, which is still redolent with the spirits of her own long-deceased parents.

Simpson excels at creating a kind of aural ambience in the narrative that gives us the impression we are hearing as well as reading the book. Characters’ thoughts seem loud, while snippets of outside dialogue are often heard briefly then faded out, as if we had a shell to our ear. Unnecessary distractions like quotation marks are dispensed with, so as not to distract from the novel’s flow.

His sense of guilt and loss in his sister’s death causes Damian to turn inward, and throughout the novel he remains mostly unknowable. There are also incestuous overtones in the descriptions of his and Lisa’s unusually close relationship. Shortly after arriving in Niagara Falls, Damian becomes besotted with Jasmine, a woman who evokes his sister in ways he doesn’t quite seem to grasp. Damian’s mourning, however, turns his passion into something explosive that threatens to sabotage the budding relationship and unhinge him completely.

Simpson means to be wrenching in all of this. But our sympathy lies less with Damian, who still has a lifetime to re-invent himself, than with another poignantly realized peripheral character, Raymond, a middle-aged judge who witnesses Lisa’s death and who gives succor to Damian when he suffers a mental breakdown later in the novel. Raymond has lost a wife to cancer and has a mentally compromised grown son who lives in a group home. His loneliness, which he recognizes as unlikely to change, is full of an aching pathos that is in sharp contrast to the shock-induced detachment of the other characters for whom loss is still so recent.

Simpson is a poet, and writes her prose poetically. Details are sometimes described so well that they feel like metaphors even when they aren’t. She dwells on things without belabouring them; it is as if our eyes linger just a little longer on the object of their gaze as our head turns away. Images are often mildly jolting, as at Lisa’s funeral:

Beside them was the casket, and in it was their daughter, cold as winter. Cold as January after a storm, when there was a glaze of ice over each stone on the beach. Cold as the white, frothy tide coming in and going out, restlessly.

Damian had kissed Lisa’s forehead earlier and he knew.

Over to one side, beneath a chair, were two black patent leather shoes. One was upright, and the other had fallen over. It was his mother’s shoes that made Damian lean against the wall and cry.

Falling is all about water, thematically, literally, and otherwise. The writing itself feels like an eddying pool, with people, places, past and present constantly overlapping, flowing and ebbing. Simpson’s skill is such that the sum total here is far greater than the parts: we don’t quite realize the force of what’s built up until near the end, when we suddenly find ourselves fully invested in this compelling web of characters.