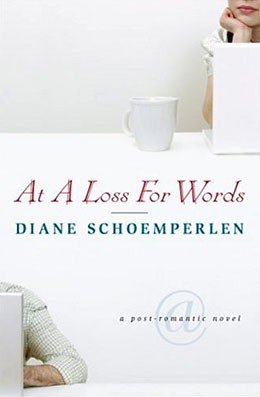 AT A LOSS FOR WORDS
by Diane Schoemperlen

Diane Schoemperlen’s break-out novel, In the Language of Love, told the history of one woman’s relationships in chapters based on the 100 stimulus words from a well-known psychological test. Since then, she has worked to establish herself as Canada’s “it” girl for quirky narrative experimentation, aiming, it would appear, to put another notch in her belt with her latest novel, At a Loss for Words.

The anonymous narrator here is a successful writer in her late 40s, contentedly — albeit somewhat resignedly — living a life of elective celibacy after over a decade of unsuccessful relationships. And so it is with cautious optimism that she embarks on a long-distance love affair with a man she has not seen in 30 years. A man who was, in fact, her first lover and first heartbreak after he left her at the age of 18 in pursuit of travel and adventure.

The ex-, soon-to-be-current, paramour appears at a book signing. The two exchange pleasantries, and resolve to stay in touch. Both acknowledge that a flame still burns. Living in separate (unnamed) Canadian cities, they begin a fast and furious communication: there are phone calls and letters by post, but mostly — in a modern incarnation of the classic epistolary novel — an exchange of emails laden with declarations of undying affection and accounts of the mundane that are the hallmark of the newly intimate.

They also begin a heavy trafficking in self-conscious clichés: That things will be different this time; that this is the hand of fate; that they have never felt this way before; that they are soul-mates; that they will never leave each other.

But the fissures are there from the start and, as the story is told in hindsight, we know what’s coming, we just don’t quite know the how of it. For one, our narrator, being a writer, is better at writing, so the burden of communication soon becomes lop-sided. She is also hopelessly bushy-tailed, something evidenced by an adolescent proclivity for exclamation points (You are so romantic!). There’s an odd sort of prudishness in the affair, too. Sex is only referred to obliquely, and, despite occasional clandestine meetings in plush hotels, their unions are not erotically charged. Buoyed on by his lukewarm and increasingly sporadic reassurances, the narrator persists in trying to stoke what is clearly a dying, sputtering fire. He replies less often, using a litany of improbable excuses for his lapses.

The effect of all the drama is to give the narrator a case of writer’s block that worsens in direct proportion to her lovesickness. She turns to writer’s guides for inspiration, consults horoscopes and fortune cookies, the contents of which are littered throughout the text.

That she will overcome her writer’s block is a fait accompli, as we are, obviously, reading the book. Schoemperlen’s interest is in exploring the lengths to which we bend reality to suit our desires, how we stamp our own image on those we hope to be our perfect “other.”

This is a well-worn path that Schoemperlen tries to invigorate with mixed success. The handful of us who have never been dumped may find it instructive, the countless others that have will find it eye-glazingly familiar, the willful blindness of the heroine frustrating.

Part of the problem is that At a Loss for Words tends to fall prey to the very clichés it is tries to render ironic. The narrator finally gets up the nerve to tell her passive-aggressive lover where to stick it, and falls back into the warm, fuzzy embrace of her best women friends. It’s a middle-aged, girl-power conclusion worthy of Sex in the City.

But in the end, the narrator is as irksome as the absentee lover is disingenuous. There are also gender stereotypes: he is distant, work-obsessed, prosaic; she is chatty, insecure, cloying. The more he pulls away, the more demanding she becomes. Readers will find it hard to blame him: her needy self-analysis becomes tiresome as their fruitless exchanges wear on.

It’s not entirely obvious that contempt for the narrator is the effect Schoemperlen is going for. As a result, the novel too often borders on grating self-indulgence. She can be sharp and witty, but these virtues get diluted by the monotony of the lists, quotes and cartoon clippings her character obsesses about. By the end of this very short book, we are no longer interested in reading another installment of the failed lovers’ horoscopes; with the outcome now known, they are no longer ironic, auspicious or funny. Stylistic idiosyncrasies are simply not enough to make up for what is rather thin gruel here and Schoemperlen’s bravado ultimately comes across as mere gimmickry.

Comments: Comments Off on AT A LOSS FOR WORDS
by Diane Schoemperlen Posted by: admin Categories: Adult Fiction, Reviews Tags: Toronto Star
← IN THE REALM OF HUNGRY GHOSTS:
Close Encounters with Addiction
by Gabor Maté
FALLING
by Anne Simpson →