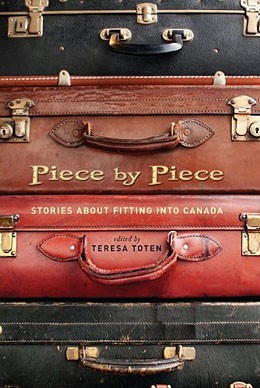 PIECE BY PIECE:
Stories About Fitting Into Canada
by Teresa Toten, ed.

“Immigrants,” writes editor Teresa Toten in her excellent introduction to this collection of essays and memoirs, “are so often hyper-aware, hyper-alert to their surroundings. We are alive to every potential snub or slur. We can track a raised eyebrow that is invisible to everyone else at the table. We are forever searching for the unwritten social rules, the clues to belonging.” 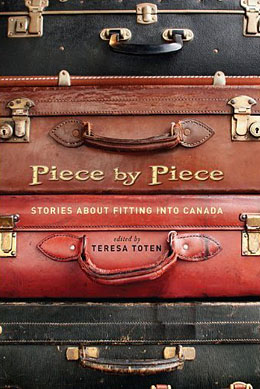 The 14 selections here bear out Toten’s thesis. Many of the writers and artists went through a process of alienation, integration, homesickness, and even rebellion against their adopted home. But nearly all acknowledge that it was their status as outsiders that honed their craft. Alienation and the desire to be accepted are, of course, the stock-in-trade of adolescence, making the subject of this book a natural fit for its intended audience.

Most of the pieces are written as straight essays, but two make a refreshing break from the format. Russian-born graphic artist Svetlana Chmakova’s funny, moving account of arriving in Canada as a teen is presented as a comic strip, while slam poet Boonaa Mohammed, originally from Ethiopia, uses verse to recount the bullying he endured in his adopted home.

Although racism often rears its ugly head, Richard Poplak’s perspective as a white South African teen witnessing the easy racial integration of his peers offers a fascinating twist on the subject, while Linda Granfield’s essay about being an American in Canada offers a thought-provoking look at what may be one of the last semi-sanctioned prejudices in this country.

The reader satisfaction award surely goes to Rachna Gilmore. As a girl in 1960s Bombay, Gilmore got hooked on Anne of Green Gables (though she assumed the island setting was entirely fictional). She eventually moved to PEI and married an islander. Her sense of paradise found eventually wore off, of course, and it is this process that lends her story its deep humanity and poignancy.

The only oddity here is the unexplained inclusion of a story by Toronto resident Rui Umezawa, who, apparently not aware of the book’s subtitle and thematic focus, writes about growing up in Milwaukee. Overall, however, this is a stimulating, thoughtfully compiled collection that should encourage young readers to see their country, their classmates, and possibly themselves in an entirely new light.