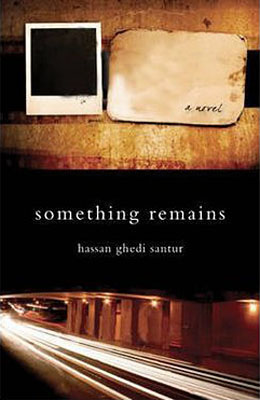 SOMETHING REMAINS
by Hassan Gehdi Santur

One-time war photographer Andrew Christensen, the main character in this debut novel, now takes portraits of willing customers who enter the cab he drives around Toronto. Andrew’s mother, Ella, has just died of cancer, and his father, Gregory, cracking under the stress, uncharacteristically assaults a stranger in a bowling alley. Andrew’s marriage – the result of an unplanned pregnancy – is also facing difficulties. On the day of his mother’s viewing, Andrew’s old flame, an actress named Sarah Turlington, unexpectedly shows up. Their passion is instantly rekindled, and the two fall into bed, despite the fact they are both married.

The novel’s other thread follows Andrew’s best friend Zakhariye, a Somalian immigrant who is the managing editor of a literary magazine. Zakhariye’s problems are not unlike Andrew’s: less than a year ago, a car accident killed his young son and severely injured his wife. The aftermath has put stress on their relationship and caused Zakhariye to question the job he has worked at for seven years.

Santur’s writing employs frequent, careless repetition of nouns and phrases, while jerky, impulsive characters are prone to sudden, histrionic outbursts of all-caps swearing. Bothersome details abound. Ella, Sarah’s acting coach for five years, was her “magnificent teacher, supporter and encourager.” Sarah has intended to call her mentor all week, yet her rather unusual name – Ella Kotsopoulos Christensen – does not register when Sarah reads it in the obituaries. Gregory meets with a salesman in the “home renovation section” of Home Depot and “decides to start on the garden” in December.

These seemingly trivial things add up to one big mess: Santur is throwing a pot of undercooked spaghetti against a wall in the hope that a single strand will stick. He cannot expect his readers to care when he appears to care so little himself.