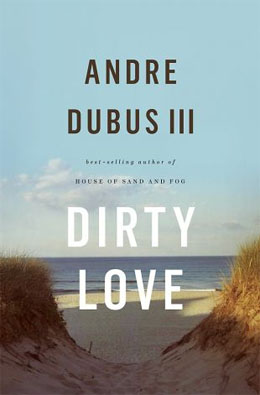 The imperial sounding “III” at the end of Andre Dubus’ name used to be necessary so readers and publishers wouldn’t confuse him with his father, the late, beloved short-story writer Andre Dubus II, though the young Andre’s fame has long since eclipsed the elder’s (his 1999 novel, House of Sand and Fog, became an Oprah-endorsed bestseller and Oscar-nominated movie). Dirty Love is Dubus’ second book of short stories. He’s also written three novels and, most recently, a memoir, Townie, which went a long way toward illuminating the grim preoccupations that have dominated his work, most of which is set in the scrappy New England towns where he grew up.

The first of the collection’s four tenuously related stories, “Listen Carefully As Our Options Have Changed” seems, at first blush, like a straightforward anatomy of an affair. Mark, a middle-aged project manager, has just confirmed what his instincts were already telling him about his attractive, real estate agent wife. Mark’s mastery of corporate risk management techniques have made him “overwhelmingly successful” at his job; applied to his personal life though, they simply make him a bully. Dubus does many things impressively here, one of which is to reach a long arm behind Mark, with whom our default allegiance lies, and shift our sympathies to his wife, whose perspective we never have direct access to.

Even when they’re having affairs, Dubus’ female characters tend to be victims of men, while the men are victims of their various appetites (sex, work, alcohol). When it comes to women, they often inhabit protective or predatory extremes. After years of seducing women with his bad poetry, Robert, the protagonist in “The Bartender,” is trying to make the transition from the latter to the former. But though he idealizes a life of commitment, he readily succumbs to a come-on from one of the waitresses at his bar, while the vision of his quiet, pregnant wife makes him feel “called once again to great and important things”; in other words, it’s still all about him.

The melding of his characters’ work and personal lives gives Dubus’ stories a distinctly American cast. The titular heroine of “Marla”— a lonely, overweight, cat-loving 29-year-old virgin—is unable to interpret the world other than through the service-economy prism of her job as a bank teller. Her attraction to Dennis, a heavyset radio engineer, is based on “his neat and legible deposit slips, the tentative way he’d push them over to her, his thirty thousand in savings. Marla thought a balance like that showed maturity, the kind of person who planned ahead.” It’s only when they move in together that Marla realizes the deposit slips were the tip of an OCD iceberg. “Business before pleasure, right?” Dennis quips as he potters about the house, feather duster in hand.

The sly corrosiveness and sharply holographic details of the first three stories aren’t as evident in the novella-length “Dirty Love,” which, tempo-wise, functions as a kind of adagio to the previous movements’ andantes. While the story of Devon, an eighteen-year-old girl who moves in with her great uncle after being unwittingly filmed in a sex video that ends up on the Internet is capably told, its characters fall a bit too neatly into types: Devon’s uncle, a recovered alcoholic suffering from PTSD, is a tad too redeemed; her father a tad too irredeemable; her exploiters a bit too single-mindedly exploitative.

As a cloak thrown over the collection as a whole, the story’s title works perfectly. Messy, crude, sordid, tainted: the love in these stories is dirty in every sense of the word and Dubus is a masterful enough writer to make us wonder if there’s any other kind.