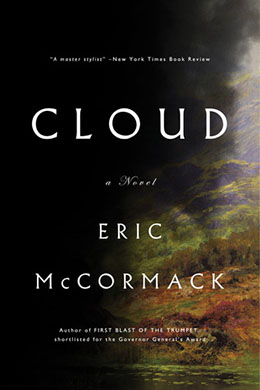 Eric McCormack is one of our most boldly original and entertaining writers, but despite a Governor General’s Award nomination for his 1997 novel First Blast of the Trumpet Against the Monstrous Regiment of Women (whose trip-off-the-tongue title was adapted from a 16th century polemic by Presbyterianism founder John Knox), he remains relatively unknown and unfêted. To be sure, the 12-year gap between his newest novel, Cloud, and his last, The Dutch Wife, hasn’t helped keep him at the forefront of readers’ minds. But another reason might be that, as our sole practitioner of what might be described as absurdist existential neo-Gothic fiction, he’s in a genre all by himself.

McCormack has a liking for metafiction and self-referentiality, which adds to the dreamlike, deja vu sense we get reading him. It also makes his fiction, taken as a whole, parse like a series of musical variations. The one-legged miners who appeared in Inspecting the Vaults, The Paradise Motel and First Blast are here, as are his preferred locales: the Scottish “Uplands” and the hybrid Ontario town of Camberloo (McCormack was born in a small Scottish mining town and taught for years at the University of Waterloo).

Cloud overbrims with familiar themes and tropes: unexplained phenomena, orphans trying to rise above their lot, morally questionable experiments, encounters with South Pacific tribes, tragic deaths, mistaken identities. This, though, feels like their most pleasing arrangement to date.