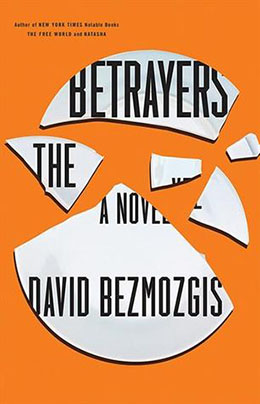 THE BETRAYERS
by David Bezmozgis

David Bezmozgis’ two novels both feature characters trying to determine their futures from a place of temporary exile—the difference is one of scale and scope. Where his first, The Free World, about the members of an extended Jewish family awaiting their immigrational fate in 1970s Rome, was stretched over a six-month period, the present-day action of The Betrayers, his latest, is spun out by its two principal players in a mere 24 hours. Its compression of space and time, along with heavy use of dialogue, can make the novel feel like a stage play; it would no doubt be a very good one.

One of our two protagonists is 62-year-old Baruch Kotler, a “dissident champion” from the former Soviet Union who’s now the Israeli Minister of Trade. After he refused to be blackmailed by the prime minister’s henchmen—who wanted him to toe the party line and support the ouster of settlers from the occupied territories—Kotler has just been publicly outed for the affair he’s having with his young assistant, Leora. The anxious couple has just arrived in Yalta, where they hope to ride out the worst of the scandal (Bezmozgis’ 2014 Crimea is conspicuously devoid of the region’s recent troubles—apparently he doesn’t have a crystal ball—which makes the novel’s events feel a bit like they’re happening in a parallel universe).

After discovering their hotel room has been given away, Kotler and Leora take lodgings with a woman named Svetlana, who appeals to them, cloyingly, on the grounds that her husband is Jewish. That night, when Kotler glimpses the latter through a window, his blood runs cold: his host is none other than his roommate of 40 years ago, Vladimir Tankilevich, a KGB informant who sent Kotler to the gulag for 13 years on the spurious charge that he was a CIA spy.

It’s the kind of one-in-a-million coincidence that one might be apt to condemn in a lesser book. That, however, is not the case, so when Leora declares that “The odds of this, of ending up a boarder in his house, are almost nil,” we acknowledge the wink and go along for the ride.

Leora wants to leave before the confrontation takes place, but Kotler, sensing in his situation the hand of fate, insists they stay; he’s willing to offer absolution to his presumably contrite nemesis. What he finds instead is an embittered, defiant and physically decrepit Tankilevich who—unaware of Kotler’s current predicament—presumes the latter has come to lord his victory over him.

The gripping discussion that ensues reveals that the men’s respective betrayals were born of opposing instincts: Tankilevich’s had been to protect a family member, a decision that, by making him a villain in the eyes of his people, ensured he would never see Israel. Kotler, on the other hand, has put political principle above family and sacrificed his wife Miriam, who loyally stood by him when he entered prison as a rank and file Soviet citizen and was key to his political rise after he emerged “a gaunt, desiccated saint.”

The Israeli-Palestinian conflict lurking silently offstage obliquely echoes in various places. Nina Semonovna, a community leader on whose meager stipend Tankilevich resentfully relies, has plans to reclaim a Jewish school once occupied by the Gestapo and now used by a sports organization, a goal Tankilevich deems unfair: “The innocent students of the Institute of Sport hadn’t done this. Why should they be dispossessed?”

If Kotler is unwavering in his convictions about the settlers, he demonstrates more latitude with Tankilevich: “Guilt and innocence were not fixed marks. There were extenuating circumstances. Wasn’t this the governing logic of the times? That cause and effect could not be easily disambiguated?”

Since his first book Natasha and Other Stories (a tale from which Bezmozgis is in the process of adapting to film) appeared in 2004, Bezmozgis has produced nothing but first-rate fiction. His hallmark wit is here, though there are fewer laughs per capita than in The Free World. Still, few novels with The Betrayers’ intellectual aspirations and moral nuance are this entertaining.