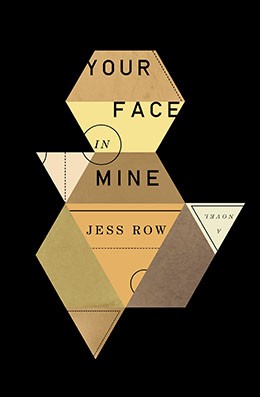 YOUR FACE IN MINE
by Jess Row

America often gets accused of being “race obsessed” and for the most part its literary canon—from Mark Twain to Toni Morrison—bears this out. Recently though, some of the most insightful novels about race in America have been written by outsiders, notably young British-African women like Helen Oyeyemi and Chimamanda Ngozi Adichie. 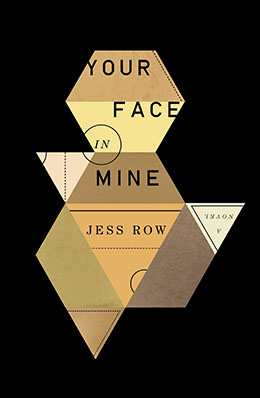 Jess Row is American, but as a white man writing about what it is to be black, as he does in his debut novel, he’s a kind of insider-outsider. Your Face in Mine one of the most gripping, fiendishly smart books I’ve read in years—not just about race, but in general. It’s one you might be inclined to pass on if you based your decision to read it on the anodyne cover blurb: “A poignant and provocative novel of identity, race, and the search for belonging in the age of globalization” could describe an average day in any North American city. It also makes Your Face in Mine sound more wistful than the savvy, suspenseful yarn it is.

Row’s disarmingly original premise goes like this: After his wife and young daughter die in a car crash, Kelly Thorndike, a failed academic, moves back to Baltimore, the city where he spent his high school years. In a forlorn shopping plaza, a familiar-looking man approaches him and identifies himself as Martin, Kelly’s close high school friend and former bandmate. Confusion instantly morphs into shock: Martin had been white and Jewish; he’s now African American.

Martin explains he’s had racial reassignment surgery, a procedure catering to those who believe, like those seeking gender reassignment, that they were born in the wrong body. The result is so convincing that even Martin’s gorgeous black wife, a doctor with whom he adopted twin girls from Japan, is unaware of his transformation.

Later, when they meet for lunch, Martin has a proposal for Kelly, who’s just lost his job running a local NPR station. Martin wants to go public with his story, but to do so he needs an Oprah-ready “narrative.” For a significant fee Kelly could be, as Martin puts it, “the Alex Haley to my Malcolm X.” Kelly would also travel to Bangkok to meet the Thai surgeon whose innovative skin-darkening procedure made Martin’s transformation so flawless.

Much of Kelly’s own life has been informed by race-related issues. Coming of age under the shadow of the L.A. riots, he struggled, like many white teens, with the ethics of “appropriating” black rap music. He met his wife Wendy while studying in China, but despite his fluency in the language and a dissertation on twelfth century Chinese poetry, assimilating into Chinese society proved futile and the couple returned to America.

Many of the fascinating, provocative questions raised in the novel—like what it means when one race tries to “pass” for another, as some blacks attempted to do in the past—are explored through Row’s riveting and frequently witty dialogue. This is a novel that brims with talk.

Kelly and Martin’s rekindled relationship is haunted by the spectre of their charismatic former bandmate, Alan, who died of a heroin overdose. After the funeral, Martin had disappeared. Kelly, meanwhile, lived with the secret burden of having handed Alan the syringe that killed him, believing it was insulin for his diabetes.

But now Martin reveals that he’s known this all along. It feels like a power play. Having established leverage over Kelly, the question is how Martin will use it.

The answer comes in Thailand, where Martin reveals his grandiose plan to monetize his procedure on a global scale; suddenly, profit seems as much a part of his motivation as self-realization. Julie-Nah, a Korean woman who turned white and now regrets it, bitterly tells Kelly that “the future of whiteness is colors.”

Could a “post-racial” society be one where race is a consumer or aesthetic choice like any other? Pitting nature versus nurture versus capitalism, Row has spun this question into a speculative game, one that brilliantly plays on our assumptions, insecurities and obsessions.

Comments: Comments Off on YOUR FACE IN MINE
by Jess Row Posted by: admin Categories: Adult Fiction, Reviews Tags: Fiction, Toronto Star
← 10:04
by Ben Lerner
THE UNSPEAKABLE AND OTHER SUBJECTS OF DISCUSSION
by Meghan Daum →