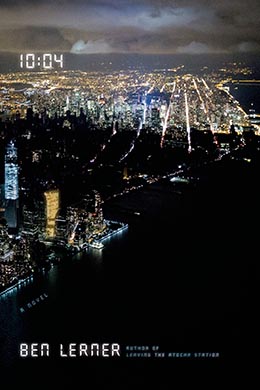 It’s one of the harsher rules of the literary game that a single highly acclaimed novel will always trump an entire shelf of award-laden poetry, which is why, after writing three highly acclaimed, award-winning volumes of poetry (one a finalist for the National Book Award), Ben Lerner only came to public prominence after his first novel, Leaving the Atocha Station, made a number of key Best of the Year lists in 2011.

As a novelist Lerner is—to use the kind of hoary sports metaphor he never would—hitting it out of the park. As in Atocha Station, the main character in his genius-level follow-up, 10:04, is an author named Ben Lerner, its events a palimpsestic melding of fiction and reality. Reading it is akin to sitting in a roomy screened-in porch: we can never quite decide if we’re outside or in. In its art-as-life approach, irrepressible wit and sporadic use of black and white photos, the novel might be described as Sheila Heti meets David Sedaris meets W.G. Sebald (any author that uses photography reflexively gets compared to the late German writer, but Lerner’s wonderful aesthetic ruminations conjure him, too).

The book is plotted in the way that life is plotted; which is to say, not really. Ben Lerner the character is a poet living in Brooklyn who has published a critically acclaimed novel and has just been diagnosed with a rare heart problem. His best friend Alex has asked if he’ll donate sperm so she can have a child. His girlfriend, Alena, is an admired conceptual artist who treats the relationship like she could take it or leave it.

At the beginning of the novel Ben is out celebrating with his agent, who’s told him she thinks he could get “strong six-figure advance” if he writes a novel based on a short story he recently had published in The New Yorker. That story, “The Golden Vanity,” which includes the best description of coming off general anaesthetic I’ve ever read, and whose main character is called “the author,” really did appear in The New Yorker and is included here in its entirety. The novel Ben is to write, you may already have guessed, is the one we’re reading.

At one point Ben relates how, when The New Yorker suggested cutting what he considered a key part of his story, he’d impulsively withdrawn it “as evidence of my vanguard credibility,” only to come groveling back later, his agent citing by way of alibi his inexperience.

The story itself was based on an anecdote Ben had “stolen” from Alex about having her wisdom teeth extracted. Alex isn’t happy about being cast in Ben’s fiction, so to make amends he proposes using some of his fee (assuming this is one of the novel’s real-life parts, one of its takeaways is that The New Yorker pays approximately $8,000 for a short story) to help pay for her artificial insemination. “Besides,” Ben reasons, “it’s a nice crossing of reality and fiction, which is what the story is about in the first place.” (The coup de grace here is that Ben is able to read his story in The New Yorker while waiting for Alex at the doctor’s office the following week.)

Various other non-sequiturish things happen: Ben cooks a meal for an Occupy protester showering in his apartment; offers lively thoughts on The Clock (the novel’s title is a reference to Back the Future, which appears briefly in the latter film); learns of a friend’s complicated ethnic history while bagging mangoes at his food coop; helps an intern through a bad drug trip during a residency in Texas.

The novel’s humour quotient snowballs as it moves along. A scene where Ben almost wets his pants at the Museum of Natural History in order to avoid leaving his young charge alone has us nearly doing the same. Most miraculously of all, this deeply smart and witty novel lacks the pretensions and ironic cast one might assume in a book its own narrator puts “on the very edge of fiction.”

Comments: Comments Off on 10:04
by Ben Lerner Posted by: admin Categories: Adult Fiction, Reviews Tags: Fiction, Toronto Star
← THE SECRET HISTORY OF WONDER WOMAN
by Jill Lepore
YOUR FACE IN MINE
by Jess Row →