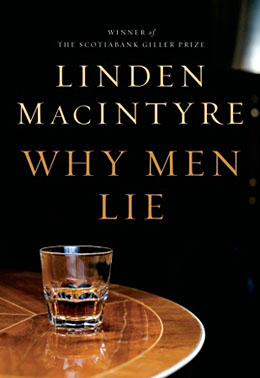 WHY MEN LIE
by Linden MacIntyre

Why Men Lie never answers the provocative question implied in its title, although author Linden MacIntyre hints strongly that part of the reason resides in another definition of the verb “to lie.” And although it turns out that men are not alone in this – women cheat and lie, too – MacIntyre’s novel suggests there’s a darkness in men’s hearts that, if not altogether lacking, is less problematic in women.

Set in the 1990s, Why Men Lie is told from the perspective of Effie Gillis, sister of “fixer” priest Duncan MacAskill, the figure at the centre of MacIntyre’s 2009 Scotiabank Giller Prize winner, The Bishop’s Man. (Why Men Lie completes MacIntyre’s Cape Breton trilogy, begun in 1999 with The Long Stretch.) The new novel finds Duncan working at a homeless shelter in Toronto, while Effie, now “into healthy middle age,” is a department head at a major university.

Numbed by the recent revelation that Sextus Gillis, the man who has been “dazzling and disappointing her since childhood,” has betrayed her yet again, Effie takes up with JC Campbell, a man who for decades has been on the periphery of Effie’s circle of friends. A television journalist, JC impresses her with his apparent calm and openness. But after they begin dating, hints of a dark past slowly start to emerge, and Effie senses in JC a simmering aggression. JC is spotted more than once talking to a prostitute in a seedy neighbourhood, and later a scuffle with some young men on the street lands him in hospital. Effie is concerned about JC’s unusually close relationship with a prisoner on death row in Texas, but more disturbing are the sudden deaths of two men with whom JC has a loose connection.

Few readers of literary fiction like a plot to be tied up too neatly, but this one barely makes it to the wrapping table. By the novel’s end, MacIntyre leaves so many questions unanswered that JC goes from being enigmatic to essentially unknowable. And even as it becomes clear that JC is a magnet for violence, Effie’s reaction seems strangely muted.

On the upside, MacIntyre shows once again he’s a master at dialogue – this diasporic gang of hard-drinking, emotionally compromised Cape Bretoners talks a lot, but never in a manner that is flat or boring.

Comments: Comments Off on WHY MEN LIE
by Linden MacIntyre Posted by: admin Categories: Adult Fiction, Reviews Tags: linden macintyre, literary fiction, loose connection, provocative question, Quill and Quire, television journalist
← THE ICE BALLOON:
S. A. Andrée and the Heroic Age of Arctic Exploration
by Alec Wilkinson
NO ONE IS HERE EXCEPT ALL OF US
by Ramona Ausubel →