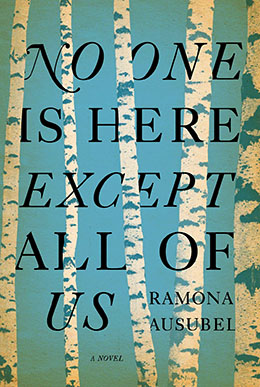 NO ONE IS HERE EXCEPT ALL OF US
by Ramona Ausubel

Latin America has long been considered the birthplace of magical realism—a style in which fantastic elements are incorporated in a matter-of-fact way into a conventional narrative—and Gabriel Garcia Marquez’s One Hundred Years of Solitude its apogee. Since then it has mostly non-Latin American writers, including Milan Kundera, Salman Rushdie, Louis de Bernières and, closer to home, Robert Hough in his most recent novel, Dr. Brinkley’s Tower, that have kept the genre alive over the years.

The latter writers all incorporate magical realist elements in their work, but in her debut novel about an isolated Jewish shtetl in Romania on the eve of the Second World War, Ramona Ausubel goes for broke and doubles down, creating a sustained magical realist fable where the characters also engage in self-conscious magical thinking.

The novel’s narrator is Lena, the village cabbage picker’s 11-year-old daughter. As the novel begins, Hitler’s armies are advancing; a call has been made to exterminate the Jews. Soft, biblically persistent rain begins to fall and does not stop. From the river’s muddy banks the villagers discover a series of strange objects, among them, a live, physically intact woman.

The woman, who cannot state her identity but remembers that her family was tortured and killed by soldiers, is simply referred to as “the stranger.” Realizing that all chance of escape is gone, the villagers, who see in the stranger a kind of prophet, consult with her before making a collective decision: they will reinvent themselves, begin anew as if they had no past, no outside connections. They re-read the Book of Genesis in preparation to write their own.

God is something they choose to keep from the old world, so they create a temple in the local barn with the stranger acting as an amanuensis recording their concerns.

But the jettisoning of the past also poses problems. With no history, conversations are harder to start. And should the villagers keep the tools of the old world or invent new ones?

Others see opportunities in their new situation. Two wives decide to trade husbands. Lena’s aunt and uncle, who are childless, ask her mother to give them one of her three children. She agrees, despondently, and gives them Lena.

At her new home, Lena is forced act like an infant to appease her smothering new mother. (Her uncle finally suggests they put her on a rapid growth schedule to allow her imagined age to catch up to her real age.) Yet as soon as she reaches her teens her mother insists on marrying Lena off to the banker’s narcoleptic son and she soon becomes a mother herself.

The villagers’ experiment succeeds for a time, but eventually fissures begin to appear in their hard-imagined cocoon. Mail is discovered; a relative remembered until, finally, soldiers penetrate the thorny barrier between the village and the rest of the world.

Although for the most part Ausubel’s writing is gentle and poetic, she sometimes stumbles into cliché. The stranger’s declaration that “Land is limited—the space around us occupied, but no one can limit belief,” has a tinge of Disney trailer to it. Later, when Lena hits the open road with her two sons after soldiers capture her husband, the first-person narrative is sometimes forgotten. The book’s last section is divided into short, choppy chapters whose contents don’t always live up to their long, mystical titles. The novel is based on the story of Ausubel’s great-grandmother’s own wartime escape to America from her shtetl, and Ausubel seems to struggle with conforming this true tale to her mythic one.

One of the things Ausubel does do remarkably well is bring characters who would normally be called “flat” to sparkling, three-dimensional life—no mean feat given that everyone here is referred to only by their profession, and speaks in short, syntactically repetitive sentences.

Though this is a story about reinventing the self, in the end what is confirmed is the impossibility of doing so. Rebirth here turns out to be denial, which may work for short spurts, but eventually has to give way to reality. In the end, the only new world that can save Lena is the real one across the Atlantic. And so she goes there, to forge a new life that will no doubt be, as it was for countless other immigrants, far from magical.

Comments: Comments Off on NO ONE IS HERE EXCEPT ALL OF US
by Ramona Ausubel Posted by: admin Categories: Adult Fiction, Reviews Tags: Toronto Star
← WHY MEN LIE
by Linden MacIntyre
THE LAST NUDE
by Ellis Avery →