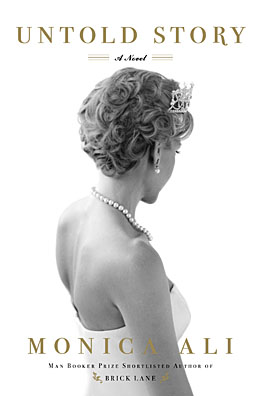 “Some stories are never meant to be told. Some can only be told as fairy tales.”

The unfortunate irony in the first line of Monica Ali’s sensational third novel is that it may be truer than she intended. The second line is just confusing, since other than its “Once upon a time” beginning, Untold Story doesn’t resemble a fairy tale in either form or content.

Untold Story is “what if?” fiction—a genre generally dominated by men and more often than not about Hitler. Our point of historical divergence here is the day in 2007 when the Princess of Wales, having decided she can no longer go on with life as fox to the paparazzi hounds, decides to stage her death by drowning while cruising off the coast of Brazil with her foreign boyfriend. To do so, she enlists the help of her trusted private secretary, Lawrence Standing, who arranges the necessary false passports, plastic surgeries and money transfers that will allow her to set up an anonymous new life in suburban America as Lydia Snaresbrook.

Out of thousands of possibilities, where does she end up but in a town of 8,000 called Kensington—surely the least probable choice for someone trying to erase all vestiges of their past? And when a notorious London paparazzo—John “Grabber” Grabowski—who once spent his days “crawling through the gorse at Balmoral” with his telephoto lens, finds himself driving around the American heartland looking for the perfect place to finish the commemorative book he’s writing for the 10th anniversary of Diana’s death, guess where he ends up? It’s a scenario only the most devout lottery buyer could ever believe possible. That or needles and haystacks aren’t what they used to be.

Lydia’s ten years off the royal grid haven’t been easy, of course. There was the decision to leave her children—whom she now learns about in the tabloids—justified by her belief that they’d be better off without her. Now she has what she supposedly craved for so long: a quiet life punctuated by Pinot Grigio-soaked rendezvous’ with a small triumvirate of female friends. Lydia listens attentively to their problems (a skill honed from her old life), drives a Sport Trac and cleans kennels at the local animal shelter. Close relationships are a problem, of course. When her claims adjuster boyfriend starts pushing too hard about her past, she breaks up with him.

But hints of the princess lurking beneath the jeans and T-shirts keep slipping out. When Amber coaxes Lydia into trying on one of the evening gowns at her store, it fits more like a glass slipper than a glove. And Amber’s trained eye is no match for Lydia’s pea-under-the-mattress sensibility, which tells her it needs to be taken in “just a fraction on the hip.”

Having studied the subtleties of her irises for years, Grabowski quickly recognizes Lydia for who she really is and prepares to file the scoop that will fund his retirement. Ludicrous coincidences aside, the psychologically suspenseful chapters that follow—with Lydia and Grabowski both trying to anticipate the other’s next move—show what Ali is capable of at her best.

The real problem is that almost everything about Untold Story feels cynical, starting with the cover, on which a Lady Di lookalike in tiara and pearls poses between lines of extruded gold type. The novel’s much-hyped UK release was timed to coincide with royal wedding mania. Diana herself would have turned 50 on July 1. And could the eventual role of Lydia be filled by anyone other than Angelina Jolie—what with the dyed dark brown hair, lip injections and nose job? Being cheap to film in, even the Smallsville, U.S.A. setting seems like a boon.

Ali has waded into controversy before, mostly notably with her 2003 Booker-shortlisted novel Brick Lane, which incited a war of words between literary titans Germaine Greer and Salman Rushdie over its portrayal of London’s Bangladeshi community when it was made into a film. But even more than her choice of subject matter, what’s bothersome is Ali’s tendency to tell us what we’ve already heard about Diana, often rather tritely: “She fantasized about riding on a double-decker bus the way others dream about riding in a horse-drawn coach.”

Ali makes another sloppy mistake in deciding to tell some of her backstory in the form of diary entries written by Lawrence, who is dying of a brain tumor. It’s hard to credit that someone capable of pulling off such a fastidious plot would risk exposing it all in a series of Dear Kitty notes left for someone to find the day after his funeral.

The reader that is going to gravitate to Untold Story is almost certainly not the one that has supported Ali in her career to date, and that may hurt her in the short run. Of course, if Untold Story: The Movie gets made, alienating readers may not be something she needs to worry about.