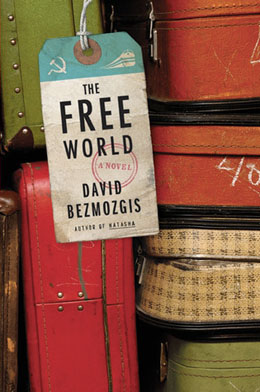 THE FREE WORLD
by David Bezmozgis

Exile comes to mind when we think of the Jewish diaspora, yet it’s limbo that better describes the state The Free World’s Krasnansky family finds itself in as its members await (in the country of Dante’s birth, no less) clearance to emigrate to America over a six-month period in Rome in 1978.

Russian Jews from Riga, Latvia, the Krasnanskys are composed of patriarch Samuil and his wife Emma, their two sons, Alec and Karl, the latters’ wives Polina and Rosa, and Karl and Rosa’s two boys. These are not exactly starry-eyed naïfs with visions of gold-paved streets dancing in their heads. Nor are Rome’s fabled charms much in evidence, the city having become, instead, a holding tank for countless numbers of Soviet Jews bound for Israel and points west. Unlike their Zionist compatriots, however, the Krasnanskys have no illusions that Israel, “a tumultuous land forever at war,” will offer them anything better than what they’ve left behind. For Samuil in particular, a lifelong Communist Party member with boots “worn down by the rubble of Eastern and Central Europe,” the “free world” represents everything he’s spent his life fighting against. This is emigration as capitulation.

The family’s decision to come to Canada has an undeniably anti-epic feel to it both in manner (their relative in Chicago decides to sponsor someone else) and setting (the dank stairwell of an immigration agency). And climate is a non-issue, Canada being a lateral move from Latvia. In the end it is Alec’s cursory philosophizing, backed up by Karl’s invocation of positive images glimpsed during the 1976 Olympics and the 1972 Summit series, that wins the 10-minute debate:

—It’s more European than America, and more American than Europe.

—What does that mean? Rosa asked

—It means, Alec said, that a person can eat and dress like a human being, watch hockey, and accomplish all this without victimizing Negroes and Latin American peasants.

Wry cynicism is the novel’s prevailing mood; even abortions and gulags don’t offer sufficient excuse for Bezmozgis to allow pathos to get a foothold. Abetted by Bezmozgis’s achingly funny shtick, most of the novel’s “action”—the amalgam of the characters’ backstories—has happened in the past and is thus told by means of flashbacks. The structureless boredom of the present merely elicits the characters’ worst qualities.

After enduring the indignity of a strip search while crossing the border and degrading, crowded conditions at the agency hotel in Rome, Alec and Polina manage to find their own apartment while the rest of the family ends up in a cottage in the suburbs. Alec and Polina’s apartment is shared, by means of a curtain, with another trapped émigré, Lyova, who has already tried “two utopias”—the Soviet Union and Israel—and now wants to live in “the country with the fewest parades.”

Karl’s natural-born capitalist instincts make the thug life his default option in Rome. Caddish Alec, on the other hand, having already courted Polina “with the measured discipline of a person climbing a long flight of stairs” then demand that she divorce her husband, leave her family and abort their child, proceeds to undermine their one-year-old marriage by tomcatting around with the daughter of a family he is supposed to be helping through his coveted job at the immigration agency. Alec sees everything through the filter of his womanizing, even his decision to emigrate. Considering the great cities of the world, any one of which could become his home, he speculates:

To live in these places you could marvel at them every day, but who did? In the same way you took a beautiful girl and made her into a wife. The wife remained enchanting, full of mystery, to everyone else. Strange men saw her on the trolleybus, concocted brute or intricate fantasies of seduction, while you waited for her to come home with the groceries and wash your socks.

Samuil, the novel’s best creation, forged his revolutionary principles on the Ukrainian shtetl where his father and grandfather were murdered, and as such is the only family member who has ever held anything resembling an ideal. Yet what seems to irk him the most about leaving the Soviet Union is the loss of his private driver. Once powerful and celebrated, Samuil’s life has turned into a series of humiliations, not the least of which is asking to borrow his friend’s army medals for an immigration hearing, his own having been unceremoniously swept into the trash by a “smug, acne-faced customs clerk” who doubted their authenticity.

Playing into Samuil’s discontent is the creeping realization that history is indeed random, cyclical, the trick being “to die at the right moment, consoled by the perception of victory.” He recalls his uncle’s explanation for why he was photographed in war albums wearing the same uniform “only with different hats”:

Another case in point took place during the revolution, when Samuil and his brother Reuven, both loyal members of the Red Guard, failed to prevent their Zionist cousin Yaakov from being carted away as a “dangerous element.” Samuil has never forgotten Yaakov’s impassive response to his distraught parents (who never forgave Samuil) on the eve of his arrest. No great issue was really at stake, Yaakov argued. Unlike his cousins, he had simply bet on the wrong horse, and lost.

The flawlessness of Bezmozgis’ first book, Natasha, a collection of short stories, engendered widespread certainty that his brilliant first novel was only matter of when, not if. Vermeer was never going to follow up Girl with the Pearl Earring with hackneyed doodles of cross-eyed, toothless milkmaids. Indeed, the novel’s only weakness is the wavy-screen segues to the past that start to take on a “who’s next?” predictability after awhile. Otherwise, it’s everything we hoped for: witty, intelligent, unaffected, long.

In Canada, we’ve come to expect certain things from our immigrant literature. We like our expectations thwarted, our awakenings cruel; trial by climate is virtually sine qua non. Underlying it all is a simple, narcissistic desire for admiration. We want it acknowledged, without the embarrassingly epic hyperbole that our neighbours to the south are so prone to, that hard-won Canadian happiness is better than hard-won happiness anywhere else. Yet the truth is that there are probably a lot of families, like the Krasnanskys, who choose Canada for the simple reason that it isn’t the shithole they’re trying to escape. Whether things pan out for them is something we never find out, since the novel ends before the family ever leaves Rome. What it does confirm is that Bezmozgis has written the first great Canadian immigrant story in which no one actually immigrates.

—Emily Donaldson (from the Summer/Fall 2011 issue)