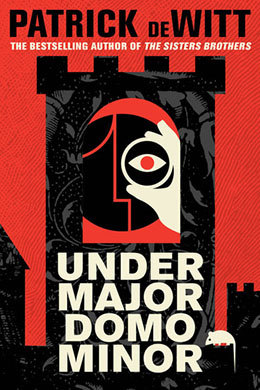 Patrick DeWitt’s struggling-author anonymity vanished with the publication of his mock-Western second novel, The Sisters Brothers, which won two major prizes (the Rogers Writers’ Trust and the Governor General’s awards for fiction) and was shortlisted for two others (the Man Booker and the Giller). After he bought film rights, the actor John C. Reilly promised to play the languid assassin Eli Sisters, a bit of typecasting so perfect it makes my hands flap uncontrollably.

There was thus a decent chance that deWitt would crumble under the weight of expectations. But the ceaseless, sparkling wit(t) and originality of his latest, Undermajordomo Minor, which he has aptly called “a fable without a moral,” proves the indomitable deWitt can’t be undone by a few trophies; in fact, by delving deeper into the absurd, he arguably takes bigger risks.

Like its predecessor, Undermajordomo is broadly picaresque, its humour deadpan. But where Sisters had a highly specific setting (the California Gold Rush), we now find ourselves in an unnamed, proximately northern European country (snow, sheepskin caps, wheels of cheese) and an unspecified century similar to the nineteenth (steam trains). Our young hero, Lucien Minor, aka Lucy, is spindly, pale and ennui-ridden. He’s also an inveterate liar. As the novel begins, he has just bid his indifferent mother goodbye, having taken a position at the castle “in the remote wilderness of the eastern mountain range” of Baron Von Aux, where he is to work under the estate’s majordomo (cue title), the garglingly named Myron Olderglough.

The Village of Listen’s chronic moneylessness is initially apparent in the hungry, ragtag soldiers (“the rebels and their tyrannical opposition”) who roam the countryside, but it also extends to the castle itself, where Lucy finds Mr Olderglough, clad in a shabby black-velvet suit with mismatched buttons, and Agnes, the cook whose terrible meals are tolerated because no one wants to offend her sensibilities. Notably absent is the Baron himself who, since the departure of the Baroness, has taken to roaming the castle’s decrepit halls by night and feasting on its rats.

Lacking companionship, Lucy goes to the town and reluctantly befriends a pair of father-son thieves he encountered on the train to Listen, Memel and Mewe, though the relationship is strained somewhat by Memel’s continual stealing of Lucy’s pipe (the pipe, bought primarily as a status symbol—“Lucy was looking forward to pointing with his pipe in a social setting; all he needed was an audience for whom to point, as well as something to point at”—is the site of one of the novel’s funniest ongoing gags).

Lucy falls in love with Memel’s daughter, the beguiling Klara. But though his affections are reciprocated, Lucy finds he has a rival in Adolphus, a brute of a soldier whose love for Klara is rivaled only by his love for war.

DeWitt had promised to provide a list of Undermajordomo’s influences at the back of the book. These were not in my advanced reading copy, but I fully expect them to include the Brothers Grimm, Monty Python, Don Quixote, Lewis Carroll, Dracula, Goethe’s Sorrows of Young Werther, Buñuel’s Discreet Charm of the Bourgeoisie and the films of Wes Anderson and Peter Greenaway. Half the fun is the endless conjecture: DeWitt’s referential stew is as thick as it is rich.

He’s also not above a bit of metafictional self-referencing, though in this description of Lucy’s attempt to write a letter we have to assume that it’s deWitt, not Lucy, who’s lying: “Lucy was no scholar, and had never before undertaken such a task as this, attempting to transform the fates of others using naked language alone. It was a tedious business, he decided, and he felt no envy of the learned men and women of the world for whom composition was their stock in trade.”