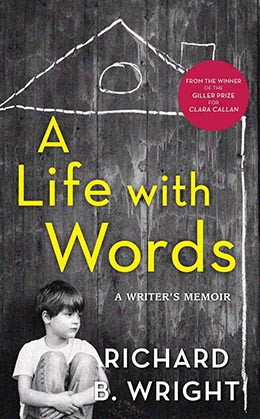 A LIFE WITH WORDS
by Richard B. Wright

As a boy growing up in Midland, Ontario, Richard Wright watched his work-bound father struggle against the deep snow brought by endless winter storms off Georgian Bay. To show his appreciation for his father’s sacrifice, Wright decided he would get up early and shovel a path so his father wouldn’t have to arrive at work in wet clothes. In his quest to make the path as wide and perfect as possible, however, Wright failed to finish it before his father left. After this happened several times, his dad suggested gently that, in future, Wright might consider shovelling a rough but serviceable path then widen it later on.

The advice would turn out to have unexpectedly useful metaphorical value when, years later, Wright became a novelist and found himself fussing over his prose at the expense of narrative energy and momentum.

Lessons like this, acquired in the raw sponginess of youth, inhabit a disproportionate amount of space in Wright’s vocational memoir, A Life with Words; it is, in other words, very much a portrait of the artist as a young man. A twenty-something Wright’s martini-soaked lunch with a jaded Toronto adman whom he’d randomly written to for career advice sprawls, for instance, over seven pages (Wright spent much of it stressing about whether he’d have to pick up the bill), while his greatest outward success—winning the 2001 Giller Prize for his novel Clara Callan—merits just a paragraph. (His 2007 induction into the Order of Canada is a mere sentence, but there’s a nice photo of him with Governor General Michaëlle Jean.)

Born in 1937, Wright is one of Canada’s greatest fiction writers. He also happens to be one of its most prolific and diverse. His twelve novels include a Swiftian, picaresque tale in which a nonagenarian recounts his involvement in a series of seminal twentieth century events (Farthing’s Fortunes); an Elizabethan-era story about a housekeeper who happens to be Shakespeare’s illegitimate child (Mr Shakespeare’s Bastard); and the (based-on-actual-events) story of man seeking to avenge the rape and murder of his twelve-year-old son (Final Things). Still, Wright remains a less familiar name than many of the upper-tier writers (Richler, Ondaatje, Atwood, say) with whom he shares a perch.

Wright got a degree in Radio and Television Arts from then-Ryerson Polytechnic Institute and worked at various small-town media outlets before becoming a junior editor at Macmillan. It was there that he also got his first break as an author, with a children’s book, Andrew Tolliver, about a boy who foils a bank robbery by disguising himself as John A. Macdonald. Wright, who submitted the manuscript under a pseudonym to avoid potential embarrassment, must have felt like Peter Parker when president John Gray raved about the book at a staff meeting before asking if anyone had heard of the mysterious author.

Clara Callan, an epistolary, cross-border tale about two sisters struggling against the gender restrictions of Depression-era North America, is widely considered a feminist novel. You’d be hard-pressed to say the same, however, of Wright’s priapic, acerbically funny first novel for adults, The Weekend Man, whose protagonist, Wes Wakeham, an aimless thirty-year-old with a powerful appreciation for blond hair and short skirts, takes a job as an educational sales rep for a Toronto publisher when his marriage begins to founder. Though Wright cites the influence of Saul Bellow, the author it most obviously conjures is Philip Roth (at one point Wright describes laughing aloud maniacally while reading Portnoy’s Complaint alone at a restaurant).

The Weekend Man languished in Canadian bookstores until it was picked up by the venerable US publisher Farrar, Straus and Giroux. The charming seriousness of the author photo in my first-edition hardcover of the latter—which depicts Wright in a tweed suit and skinny tie squinting meaningfully into the distance under a swoop of dark hair—contrasts with the more relaxed, pre-surgery-Kenny-Rogers look Wright sports on the paperback reprints of his novels.

Personal details are touched though not dwelled upon: Wright’s early sexual experiences; the webbed hand that almost cost him a job as a gravedigger; the car accident that knocked out his teeth; the winter spent in the Gaspé with his wife Phyllis while writing The Weekend Man (Wright’s has had two important Phyllises in his life: his long-time editor is Phyllis Bruce); the teaching job at Ridley College that offered stability in his later years; his lifelong struggle with anxiety. Fans will appreciate the backstage tour of his novels’ provenance (mostly, again, from the locker-room of his youth).

A Life in Words is, like Salman Rushdie’s 2012 memoir, Joseph Anton, written in the unusual third person. But while critic Zoe Heller, in her hatchet-job-of-the-year-winning review, called Rushdie’s use of the technique “de Gaulle-like,” Wright’s seems to come from an entirely different place: namely, his discomfort with the intrinsic narcissism of the memoir form itself. My theory is perhaps backed up by the ironic fact that, at barely 200 pages, this amiably modest but impactful book has (unlike Rushdie’s nearly 700-page autobiographical jeremaid) not that many words at all.

Comments: Comments Off on A LIFE WITH WORDS
by Richard B. Wright Posted by: admin Categories: Adult Non-fiction, Reviews Tags: Globe and Mail, Non-fiction
← UNDERMAJORDOMO MINOR
by Patrick deWitt
SLEEP
by Nino Ricci →