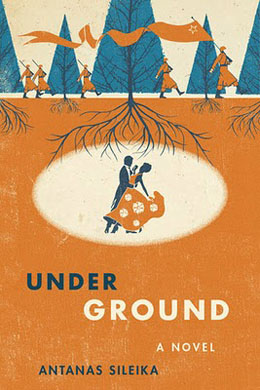 Antanas Sileika’s third novel begins with a tense, cinematic scene in the Lithuanian city of Marijampole. The year is 1946, and Elena and Lukas, members of the Lithuanian resistance, have invited a group of senior Soviet officials to their engagement party. Once their guests are drunk, Lukas and Elena enter the room like Bonnie and Clyde, guns blazing. When the couple flees the scene, they leave Elena’s sister lying amid the carnage.

The massacre’s brashness turns Lukas into something of a legend among the partisans, as the opponents of Lithuania’s postwar Soviet occupation were called. “Going underground” is more than just a metaphor for revolutionaries like Lukas and Elena, who lived in bunkers and burrows scattered around the countryside. From their damp hovels they waged war against the secret police and local “slayers” conscripted to hunt them down.

Lukas and Elena marry in a clandestine service. When Elena is apparently killed in a raid a few months later, Lukas accepts a mission to seek help for the resistance from Allied contacts abroad. Two years later, with Lukas remarried and fighting for the Lithuanian cause in Paris, he receives word that Elena may still be alive. Lukas risks his life smuggling himself back into Lithuania to discover the truth.

Underground is less convincing as a love story than as an evocation of the harsh, often brutal life endured by partisans in their struggle to bring the attention of the West to their plight. The novel’s weakest aspect is its dialogue. Characters too often explain things, and do so in a stilted way. When Flint, a partisan leader, tells Lukas, “We killed 170 Reds in a pitched battle in the Varchiai forest,” for example, it’s hard not to wince at the way “pitched” – a word more appropriate to history books – flops in his mouth like a fish out of water.

What we do feel vividly is the wearying paranoia, the damp cold of snowy, bleak landscapes fraught with danger, and the slow ebb of hope and trust that are the foundation of the partisans’ solidarity. Sileika’s novel is based on true accounts, some of them from his own family, and his intimacy with Lithuania’s dark history gives this flawed but worthy novel moments of startling power.