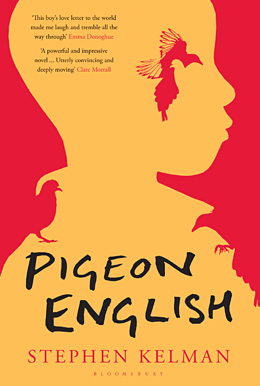 When Stephen Kelman started shopping Pigeon English, his first novel, around to literary agents, no one warned him not quit his day job—he didn’t have one to quit. And no matter, because what happened next was the stuff of literary dreams: a bidding war between 12 of Britain’s top publishers. When the dust settled, 33-year-old Kelman, whose bio cites stints as a warehouse operative and local government administrator, emerged with a six-figure advance, international rights, a two-book deal and the unenviable pressure of being The Next Big Thing.

Pigeon English is indeed a very impressive debut. The source of the fuss is Kelman’s sweetly funny and poignant portrayal of his narrator/hero: an 11-year-old Ghanian boy named Harrison Opoku who has just immigrated to a London high-rise housing estate with his midwife mother and older sister. Despite an apparent familiarity with Ghanian slang and syntax, Kelman himself is neither African nor an immigrant. The soft-spoken Brit from the working-class town of Luton did, however, grow up on a multi-cultural housing estate similar to the one he portrays, an experience he has described as having many positive aspects alongside the obvious challenges such as drugs and poverty.

As the novel begins, a young boy has just been knifed to death on the estate. To Harri, the dead boy was a “half friend,” albeit one worthy of his respect: “He could ride his bike with no hands and you never even wanted him to fall off. I said a prayer for him inside my head. It just said sorry. That’s all I could remember. I pretended like if I kept looking hard enough I could make the blood move and go back in the shape of a boy.”

Harri and his friend Dean decide to try to find the boy’s murderer, having already determined that they’ll spend the reward money on a Playstation 3, a new bike and “a shitload of fireworks.” In this respect, the book is reminiscent of Mark Haddon’s The Curious Incident of the Dog in the Night-Time. In both cases, young would-be detectives look to solve a local crime hampered only by their naïveté: Harri’s the result of his age, Christopher’s the result of his autism. In both cases, we’re aware of the bigger picture, although we too don’t quite see the whole thing.

In Harri, Kelman skillfully combines the guilessness of ebbing childhood with the oncoming swagger of adolescence in what might be described as Diary of a Wimpy Kid meets Trainspotting. Harri is just young enough not to see the dangers that lie just around the corner, such as the estate’s resident gang, the Dell Farm Crew, which has already begun testing Harri’s mettle for recruitment. Then there’s his Auntie Sonia’s “boyfriend” Julian, the local enforcer, who always carries a baseball bat but never a ball, “so we couldn’t play a game.” When Auntie Sonia shows up with a broken nose and a black eye, Harri wants to “destroy” whoever did it until she explains that her suitcase simply fell on her face.

Most of the novel’s humour comes from the unique way Harri filters the depressing or sinister aspects of estate life. A sign in the playground that reads “Say No To Strangers,” perplexes Harri, who reasons: “It doesn’t even tell you what the question is. You just have to say no to whatever they ask you.”

When he asks his mother about the closed circuit cameras on the estate, likewise, she tells him the allow God to watch him when He’s busy in other parts of the world:

“Me: ‘But I thought God could see everywhere at the same time.’

Mamma: ‘He can. The cameras are just for extra help. For the places where the devil is very strong. It’s just to make you safer.’

Adjei, the devil must be mighty strong around here, there’s cameras all over the place!

Harri takes an equally practical approach to the increasingly important issue of sexual politics. He tells us that the school’s computers can be used for homework or email but that “You can’t use them for chat room anymore because everybody kept asking each other what colour pant they were wearing. Now chat room’s blocked. You can still do instant messages.”

Pigeon English has a fresh, undeniable appeal, but Kelman doesn’t entirely knock it out of the park. Plotting gets swept aside for long stretches in order to focus on the coming-of-age aspect of the novel, but Harri’s charm-assault eventually begins to flag. And italicized monologues from a kind of “spirit pigeon”—Harri’s favourite bird—feel contrived. Kelman clearly has the instinct and the skills for future greatness. If this book doesn’t make him The Next Big Thing, there’s a good chance his next one will.