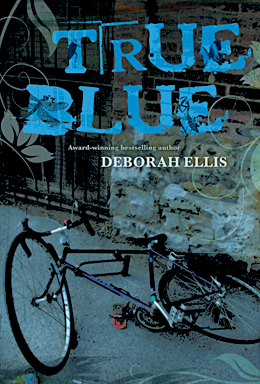 As a straight-ahead murder mystery, True Blue represents a departure for author Deborah Ellis, who is known for her many stellar YA novels focusing on the lives of immigrant and refugee teens.

Long-time best friends Jess and Casey are camp counsellors together when the body of one of their eight-year-old charges is found inside the trunk of a hollow tree. The dead girl’s bloody T-shirt is later discovered in Casey’s luggage, and she is quickly arrested and charged with the murder.

The accusation comes as a shock, given that Casey has always been a model teen: brighter than average, and a patient counsellor to the girl, Stephanie, who was a difficult child prone to running away. But in its collective desire to assign blame for Stephanie’s death, the town quickly turns against Casey, whose passionate interest in insects (she plans to be an entomologist) is suddenly portrayed as sinister. And when a group of teens vandalizes Casey’s home, no one lifts a finger to help her mother repair the damage.

As Casey awaits trial, police, lawyers, and the press look to Jess for information to help clear her friend’s name. Though she knows Casey is innocent, Jess can’t bring herself to speak up. With some gulit, Jess realizes that as long as Casey is in jail, she won’t be able to use a scholarship to Australia that would take her away from home for three months.

After masterfully keeping her readers on tenterhooks – particularly in her psycho-logically nuanced portrayal of Jess – Ellis takes the easy way out in a disappointing ending. Given her dedication to portraying the harsh reality of children’s lives, it’s surprising that Ellis chooses here to perpetuate popular misconceptions about child murderers that may needlessly scare – rather than enlighten – her readers.