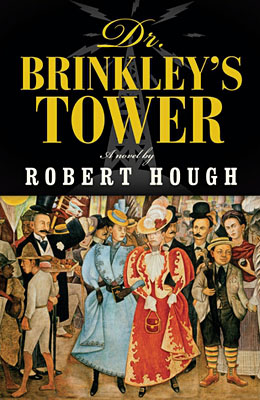 Robert Hough returns to historical fiction for his fourth novel, a cautionary tale set in Corazón de la Fuente, a Mexican border town where the dust of revolution has not quite settled. The plot involves the historical figure John Romulus Brinkley, an American doctor of dubious credentials famous for a controversial impotence treatment that involved injecting men with an extract derived from goat testicles. Eager to harness the power of radio to promote his practice, Brinkley became one of the first to circumvent U.S. broadcast regulations by using a so-called “border blaster” – a tower built in Mexico with a signal so powerful some said it could be heard as far away as Russia.

Grateful for a renewed sense of purpose, as well as the prospect of much-needed employment, the citizens of Corazón de la Fuente readily embrace Brinkley’s tower, dismissing the local witch doctor’s warnings that it is the work of the devil. Once erected, the “phallic monstrosity” appears to have an almost aphrodisiacal effect on the locals. But as the money rolls in, so do the thieves and vagrants. With business at the local brothel and cantina booming, the town morphs into a Mexican version of Sodom or Gomorrah.

Dr. Brinkley’s Tower reads like a fable, with Hough adopting a tongue-in-cheek, faux naïf style reminiscent, at times, of Louis de Bernières. However, neither the novel’s outcome nor the fates of its various (mostly likeable) characters is ever really in doubt, and Hough’s wisecracking can’t make up for the lack of suspense. Nor is Hough quite strenuous enough in resisting the temptation to teach his readers lessons in both history and human nature.