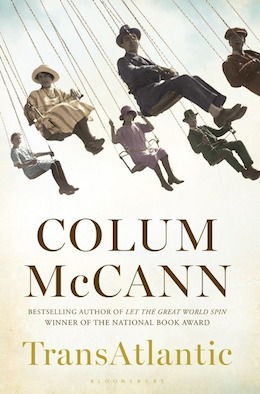 Like his 2009 breakout Let the Great World Spin, Colum McCann’s latest novel is told through a multiplicity of interrelated perspectives. But where the former pinpointed a single time and place—New York in the ‘70s—Transatlantic spreads itself grandly over a century and a half, commingling historic characters with fictional ones as it zigzags across the salty pond separating America from Ireland.

The novel is divided into two “books.” Each of Book One’s three sections gives us an important moment in time involving famous, real men: in 1919 Alcock and Brown pilot the first non-stop transatlantic flight from Newfoundland to Ireland; in 1998 U.S. Senator George Mitchell brokers a historic peace deal with Northern Ireland.

The middle section, about Frederick Douglass’ 1845 tour of Ireland, though, is the novel’s most nuanced. There to rally support against slavery in America, Douglass encounters adulation everywhere he goes. The Irish see him not along the lines of race, but as a fellow victim of oppression and call him the “black O’Connell.” It’s an awkward position: he’s expected to sympathize with a cause to which he’s given little thought. Insidious signs of the famine that has yet to wreak its full devastation exacerbate Douglass’ sense of unease.

The job of weaving these disparate tales together falls to four generations of women from the same fictional family whose stories are fleshed out in Book Two. Inspired by her encounters with Frederick Douglass at the Dublin home where she worked as a servant, Lily Duggan comes to America solo to start a new life. Years later, Lily’s granddaughter Lottie asks Arthur Brown to take a letter in his mailbag shortly before his historic takeoff, while her mother, Emily, a reporter, looks on. Marriage eventually takes Lottie back Ireland, where, while playing tennis one day, she spies Senator George Mitchell and cheekily critiques his backhand.

The final section, set in 2011, is told from the perspective of Lottie’s daughter Hannah, whose life began an inexorable slide after she lost her son to the Troubles. In her possession is a family artifact of potential historical value: the novel’s bow, waiting to be tied.

McCann has cited Michael Ondaatje as an influence, and it’s easy to see this in the brief, unfussy sentences for which he is frequently praised. That being said, his descriptions can be non-sequitur-ish: “He was lean, handsome, daring, the sort of man who looked straight ahead but stayed open to laughter.” Here, his fragmentary style is often pushed to an uncomfortable limit, especially in the Alcock and Brown section, where a kind of grammatical onomatopoeia used to convey the breathless excitement of flight quickly gets tiresome.

My chief complaint with Transatlantic is that its female characters come off as a bit inconsequential. Though the writing strives toward chatty intimacy, we often feel the outlines of McCann’s self-awareness. The novel seems to suggest that we should view these women’s personal acts of bravery on a par with the men’s more public, heroic ones, and yet McCann can’t quite stave off the slide into dullness that caused my attention to wander in the book’s second half.

Saying that the novel’s elegant structure is what I admire most about it sounds, I realize, like complimenting a painting for its frame. But it’s a formidable achievement; even the best writing will crumble for lack of a proper scaffold. McCann has won many passionate readers over the years, and while this isn’t his best effort to date, many will, I suspect, feel happily placated.

Comments: Comments Off on TRANSATLANTIC
by Colum McCann Posted by: admin Categories: Adult Fiction, Reviews
← THE ELIOT GIRLS
by Krista Bridge
YOU ARE ONE OF THEM
by Elliott Holt →