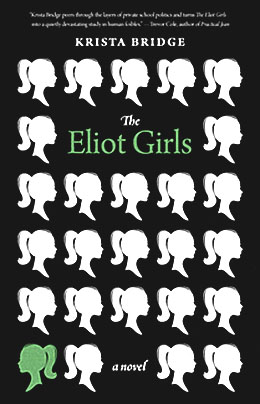 THE ELIOT GIRLS
by Krista Bridge

As any fallen politician—take your pick—will tell you, our loftiest ideals have a habit of deferring to our baser instincts. So it is with the students of Toronto’s George Eliot Academy, the elite private girls’ school that is the focus of Krista Bridge’s debut novel, who, despite having access to the finest education money can buy, never quite lose touch with their cruelest, most vituperative selves.

Fifteen-year-old Audrey Brindle has wanted to be an “Eliot girl” since the Academy opened its imposing gates a decade ago. Now, after finally passing the entrance exam—albeit barely—her longtime dream is about to become a reality. She should be overjoyed, but instead she’s terrified and unsure of herself. Audrey’s mother Ruth, a teacher at Eliot and the driving force behind the latter’s aspirations, finds her daughter’s change of heart both frustrating and mystifying.

Audrey’s fears turn out to be well founded. Though the school’s uptight headmistress and founder, Larissa McAllister, conceived of Eliot as “a breeding ground for enlightened thinkers, that would liberate girls from the handcuffs of imitative academics—the mind-shrivelling path of learning set by men and for men,” Audrey finds it an unfriendly, forbidding place.

Read the full review at the National Post’s Website:
http://arts.nationalpost.com/…the-eliot-girls-by-krista-bridge/

Comments: Comments Off on THE ELIOT GIRLS
by Krista Bridge Posted by: admin Categories: Adult Fiction, Reviews
← THE LAST SUMMER OF THE CAMPERDOWNS
by Elizabeth Kelly
TRANSATLANTIC
by Colum McCann →