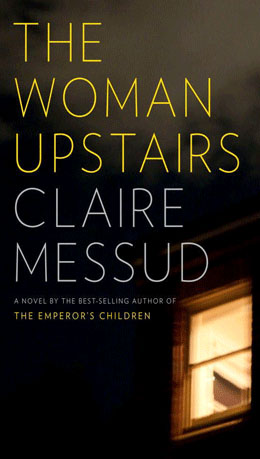 THE WOMAN UPSTAIRS
by Claire Messud

In the spring of 2013, Claire Messud famously lost her shit with a writer from Publisher’s Weekly who commented, in regard to Nora Eldridge, the protagonist from her novel The Woman Upstairs: “I wouldn’t want to be friends with Nora, would you? Her outlook is almost unbearably grim.” Messud replied:

Now that might not strike you as quite “losing one’s shit.” In book circles, however, the exchange was greeted with the same kind of slack-jawed incredulity normally reserved for watching brawls in foreign parliaments on YouTube. All of which made it, if not quite publicity gold, then certainly bronze.

The Woman Upstairs received a warm critical reception from all the right places, but in the wake of the dust-up, discussion quickly narrowed to two topics: whether the interviewer’s question was implicitly sexist, and more insipidly, whether “likeability” in characters generally denotes a lack of literary seriousness.

While the jury continues its deliberations on that topic, it’s worth noting that Nora isn’t, by any stretch of the imagination, unlikeable. She is, after all, the favourite teacher at her Cambridge, Massachusetts elementary school, the dutiful daughter who saw her mother through a slow decline and death from ALS.

What she is, as she declares in the book’s opening pages, is angry. Angry that, despite having had boyfriends and designating a room in her house as a studio, she’s neither of the two things she expected to be at 37: mother, artist. For the poor decisions and bad timing that led to this result, she blames only herself. At the point from which she is actually narrating, at 42, however, her anger comes from another source entirely: the betrayal toward which the novel inexorably hurls itself.

Before she is betrayed Nora is seduced. Before that, awakened. In novels and in life, awakenings, if they’re not religious, tend to be caused by an affair. Nora’s tripartite awakening (artistic, sexual, intellectual) is unusual in that it is instigated not by a lover but by a family of three from Paris—which is a bit like coping with your midlife crisis by buying a mini-van instead of a motorcycle.

Nora first encounters the Shahids when their son, Reza, becomes a pupil in her third-grade class. Physically incandescent, Reza is described in metaphors suggestive of the perilous fall yet to come: “Already in that moment, I loved his nape, the carefully marshaled black curls lapping their uneven shoreline along the smooth, frail promontory of his neck.” His perfection, what’s more, extends to other realms. He is kind, polite, empathetic. Nora wishes he were hers.

Waiting in the water beneath this neck-like promontory is the siren calling to Nora’s sailor: Sirena, Reza’s glamorous, Italian, installation-artist mother. Early in the novel, Reza is the victim of a bullying incident at school, and Nora, already taken with Sirena’s self-assured beauty, her foreignness, suggests they meet at a café to discuss it. The conversation eventually digresses to other subjects. Sirena talks about her work, and Nora mentions, with a hint of defensiveness, that she too is an artist. When Sirena suggests they could share a studio, Nora doesn’t hesitate before saying yes.

As Sirena toils away on Wonderland, her grandiose interactive project, Nora finds that Sirena’s presence allows her to sink her teeth into hers: a series of miniature replicas of rooms inhabited by famously isolated women—Emily Dickinson, Virginia Woolf, Alice Neel, Edie Sedgwick. Each is presided over by a tiny golden muse, a role Sirena comes to play for Nora: “When Sirena left me, sooner or later I’d look up from my table and realize that I was alone in a tiny pool of light in a great dark room, as if I were myself the figure in someone else’s diorama, manipulated in my own stage set by a giant I could not see.”

At first, Nora’s infatuation with Sirena takes the form of heightened artistic admiration: “I coveted her very imagination and wished it were mine.” As the months go by, however, she becomes convinced she’s in love, making Sirena’s Lebanese academic husband, Skandar, her natural rival. But he, too, eventually earns a special place in the trinity of her affections. At Sirena’s request, Nora starts babysitting Reza, which allows Skandar, as he walks her meanderingly home afterward, to charm her with lectures on Lebanese politics and intimate details of his upbringing.

When Nora shares her feelings about the Shahids with her friend Didi, Didi frames the situation as a kind of wonky Greek myth: “so you’re in love with Sirena, and you want to fuck her husband and steal her child.” Nora denies this. What the Shahids give her, she says, is “a feeling of possibility. Yes, hope. Like maybe it isn’t all over yet.” Later, in one of several acutely perfect scenes, Didi and her girlfriend Esther try to convince Nora that what she feels for Sirena is a mere “girl crush,” a characterization Nora resents deeply.

The state of heightened receptivity Nora now finds herself in is the kind only love, or certain drugs, can induce: “By God, I felt and felt and felt.” Like the zealot convinced of an imminent End of Days, she finds significance, meaning in everything around her. Stars align; ducks fall into neat rows. Filled with magnanimity and ready laughter, it suddenly dawns on Nora that she is that most elusive of things: Happy.

One night when she’s alone in the studio, Nora drinks an entire bottle of wine and, channeling her tragic childhood idol, Edie Sedgwick, starts performing what she thinks of as a kind of exorcism, a purging of the “meek and accommodating Miss Eldridge.” The night ends with an act of release—a highly personal one—performed inside Sirena’s Wonderland. At the time, it feels to Nora like freedom.

Well before the Shahids leave for Paris, less than a year after their arrival, there are obvious signs that Nora is more invested in the relationship than they are. That she was betrayed and manipulated doesn’t become apparent until four years later, when she goes to Paris to visit them.

Though Nora hates her for it, Sirena’s particular treachery (and it’s a doozy) paradoxically makes her seem more, not less, authentic; a “real artist,” instead of, like Nora, a “spinster with a hobby.” Sirena is ruthless, but ruthless in the way that only those who believe unwaveringly in themselves and the importance of what they do can be. She’s someone who can make favours—unpaid babysitting, help with one’s major installation, for example—feel like flattery. Sirena will stop at nothing to execute her vision; Nora, on the other hand, knows she will stop at something. That she already has. Nora has been awakened only to have her awakeners tell her not to worry—she can go right back to sleep.

The book ends where it began: with Nora monologuing on her anger—the same anger that made her, in the eyes of the Publisher’s Weekly writer, such an unfriendworthy downer. It’s not superhero anger. Though she makes ominous pronouncements like “There’s no telling what I might do,” Nora isn’t the Hulk, giving us a few seconds lead time before she turns green and trashes the place. She’s not even yelly Peter Finch from “Network.”

What we learn about Nora over the course of the novel is that, while she may very well be furious, she will keep that furiousness contained. A teacher who swears in front of children nowadays will, after all, quickly find herself out of a job. Nora’s rant is not a jeremiad. Nor, despite some impressive, all-caps swearing (FUCK YOU ALL) does it come close to bursting the seams of Messud’s admirable narrative tailoring. This is anger expressed in measured, exclamation-mark-free, non-stream-of-consciousness prose, mindful of proper punctuation and paragraphs.

In many ways, The Woman Upstairs is about a character trapped within her very character-ness; the reliable narrator resentful of her own reliability. Though it’s well-nigh impossible to read the novel’s final three words: “Just watch me,” without thinking of Pierre Trudeau’s invoking of the War Measures Act during the October Crisis, we feel comforted knowing Nora would never do anything quite so drastic.