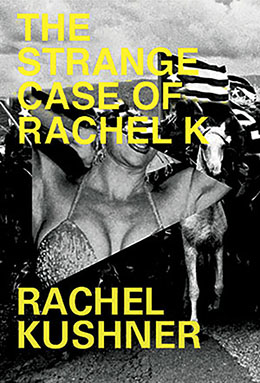 THE STRANGE CASE OF RACHEL K
by Rachel Kushner

When we’re in love, we want to learn every little thing about the object of our love: childhood dreams, adolescent heartbreaks, chips versus chocolate. Since the publication of her two remarkable novels, 2008’s Telex from Cuba and 2013’s The Flamethrowers, the American writer Rachel Kushner (who is the only author to have a first and second novel nominated for the National Book Award) has earned legions of fiercely adoring fans. It’s no surprise then that the three stories collected in this slim, sub-hundred-page volume, The Strange Case of Rachel K, all of which appeared previously in various literary journals, have suddenly been made available to a love-struck readership hungry for origin stories.

Two of them, the piercingly brief “Debouchement” and the meatier title story, turn out to be early versions of parts of Telex from Cuba, a multi-layered tale anchored on the fortunes of American expatriates working for the United Fruit Company in the days leading up to the Cuban Revolution. Both work very well as standalones.

But for those who’ve already read Telex, it’s the first story, “The Great Exception” (which first appeared in Canada’s own Descant magazine in 2006 under the title “Green Island Trinity”) that will be the real revelation. In prose as thick and dense as the tale’s tropical locale, Kushner begins with the story of a Portuguese admiral who arrives on the beautiful island of “Kuba” and is cooked and eaten by the natives in short order: “They cooked his toes separate from the rest of the stew. With the toes severed from the feet, the Admiral could not tromp inland and subjugate the island.” As that quote suggests, Kushner forays into the absurd here. She also uses anachronisms to great and often humorous effect (“He said, in a language now lost, that he Admiral tasted like rubber bands”).

Fast-forward a few centuries and a young woman named Aloha Oe has just arrived in Havana from Colorado. As she wanders the city’s cobblestone streets, she catches the eye of Ferdinand K, who—she is delighted to discover—makes the very ersatz newsreels that lured her to Cuba in the first place (something he does by floating miniature ships in the bathtub of his rooming house). Before he dies of syphilis, Ferdinand K manages to spend every one the three hundred gold coins Aloha had sewed into the hem of her petticoats. He also gets her pregnant.

Telex From Cuba readers will recognize Aloha Oe and Ferdinand K as the grandparents of Rachel K, the “zazou dancer” who beguiles a series of Cuban leaders (including the Castro brothers) and La Mazière, a real-life French Nazi aristocrat. What may also strike them is how much Kushner toned things down for Telex, a masterfully written but narratively more conventional novel than either this story or the stylistically aggressive Flamethrowers. It gives us, at any rate, a sense of how excitingly intense and weird Kushner can get when she thinks no one’s watching.

A brief introduction sheds light on the provenance of Kushner’s apparently self-referential character, Rachel K. It turns out that “The Strange Case of Rachel K” was a revolution-affirming 1970s Cuban film about a courtesan found murdered in a hotel in the 1930s. Though Kushner never saw the latter, she recognized in her discovery the hand of fate; she also determined that the destiny of her Rachel K would be different: “You might notice that she shares my name; I did too. Writers who have rejected logic and science, those galloping horses, take a different path, through coincidence, the cunning of reason, and mystical signs pointing in the direction that is to be taken.”

When she wrote those words Kushner couldn’t have foreseen another bit of serendipity: that her Cuba-set stories would be published just as Cuban-American relations are resuming after the decades-long chill that began where her first novel ended—a seeming prescience that will only give her fans reason to love her more.

Emily Donaldson is a freelance critic and editor