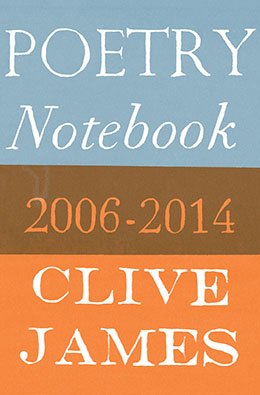 POETRY NOTEBOOK: REFLECTIONS ON THE INTENSITY OF LANGUAGE
by Clive James

It’s not often you hear of a poem going viral, but that’s essentially what happened with “Japanese Maple,” the poem Clive James, who suffers from a variety of terminal ailments, wrote about his impending death last year in the New Yorker. When his powers of prophecy failed (the poem suggested he would die after the titular maple’s leaves fell in autumn) James admitted to an Australian interviewer that he found the fact of his continued existence “embarrassing.”

But the only one bemoaning his unexpected victory lap is James himself. Unlike, say, The Who, who have produced just one album since their endless series of “farewell” tours started in the early 80s, James has been fiercely productive with his borrowed time. In 2013 he completed a translation, decades in the works, of Dante’s Divine Comedy. This spring sees the publication of a poetry collection, Sentenced to Life, and a critical miscellany, Poetry Notebook, based around a series of articles James has written for the magazine Poetry since 2006.

In his various incarnations as poet, TV host and critic, essayist and prolific author (over 40 books in 50 years), James has effortlessly bridged the divide between the scholarly and the popular. The most obvious reason for this is that, despite its intellectual rigour, his criticism has something one rarely sees in academic writing: a sense of humour.

Though not exactly a primer, Poetry Notebook will no doubt inspire many to revisit the form, especially those, like myself, whose relationship with it has been mainly within institutional walls. It is a book bursting with quotable moments, many of them spill-your-drink funny. Even at its most biting, however, James’ wit isn’t cynical. He loves his subject too much to cross that particular Rubicon.

Indeed, great poetry thrills James in the way roller coasters and celebrity sightings thrill other people. His enthusiasm is infectious. And he’s good at explaining why a poem works. So good, in fact, that a significant portion of his putative commentary sounds more like poetry than a lot of writing you’ll find sporting that label. On E.E. Cummings: “his phonetic force drove whole poems into my head like golden nails.” On bad poetry: “The trouble with a really awful poem is not that its author lacks technique, but that his technique is fully expressed.”

W.H. Auden, Richard Wilbur, Robert Frost, Philip Larkin: many of James’ heroes are familiar names. Others, like his fellow Australians James McAuley and Stephen Edgar, are less so, at least on these shores, but his glowing assessments will help change that. And I guarantee that anyone who grappled with Milton and Pound in university will enjoy his gently scathing reassessments of those canonical giants (The Cantos “were a nut-job blog before the fact”).

As a proclaimed “diehard formalist,” James occasionally uses terminology—trochees, dactyls, spondees, iambs—which the layman could be forgiven for mistaking for architectural features, or cake decorations. Still, his criteria for great poetry aren’t hifalutin. To wit, “One of the characteristics of a work of art is to drive all the other works of art temporarily out of your head. If comparisons come flooding in, it means that the work’s air of authority is a sham.”

His advice about how to approach a great poet is similarly, charmingly practical. About Robert Frost he warns: “familiarity breeds reverence: never dodge a Frost lyric just because it is famous.” James has little time for inscrutability; his oft-used expression, “getting down to bedrock,” refers to his belief that poetic ideas should be graspable. He’s also a fan of anthologies, which he refers to as “a benevolent filtration system.”

It will not go unobserved that, despite the odd name-check (Elizabeth Bishop), female poets are conspicuously absent in Poetry Notebook, an omission for which James offers a slightly sputtering mea culpa near the book’s end.

But I, for one, am happy to cut a dying man some slack, especially one who can reduce me to tears with a single sentence—his final one—which I will end with too in case you fail to read this delightful book: “Better to think back on all the poems you have ever loved, and to realize what they have in common: the life you soon must lose.”