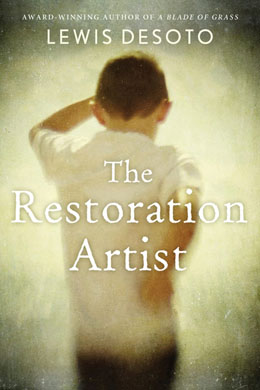 THE RESTORATION ARTIST
by Lewis DeSoto

Art’s redemptive qualities are at heart of Lewis DeSoto’s mid-1960s-set second novel about an expat Canadian painter living in France who becomes emotionally unmoored after the sudden death of his wife and son. In setting and mood, The Restoration Artist is a departure from DeSoto’s Man Booker long-listed debut A Blade of Grass, which took place in the author’s native South Africa amidst simmering Apartheid-era unrest. There’s violence here too, but it’s all in the past.

Leo Millar, our protagonist, was raised in a Vancouver orphanage never knowing why his parents abandoned him. That he eventually found his calling is thanks to Brother Adams, a priest at the orphanage who recognized Leo’s talent and helped him get a scholarship to art school. As Leo thinks back, there’s a distinctly Joycean twang to the philosophy with which he eventually sought to make his way in the world: “But whatever God listened to prayers had not stirred on my behalf. By the time I’d entered my teens I’d realized that you got through this life with your guile, your fists and whatever measure of talent you could scrape together.”

Despite a successful career that took him to New York and Paris, it wasn’t until Leo met his future wife Claudine that he found true happiness, one intensified by the arrival of their son, Piero. It’s safe to say that the idyll Leo describes in hushed, exalted language—“Life had been serene here, mother and child like gifts to me from heaven. Days and nights of contentment”—is one you’re unlikely to find replicated in today’s parenting magazines.

Read the full review at the National Post’s Website:
http://arts.nationalpost.com/…the-restoration-artist/