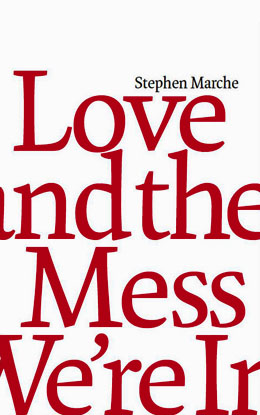 LOVE AND THE MESS WE’RE IN
by Stephen Marche

Love and the Mess We’re In is a simple tale about three people acrobatically told through a series of unconventional text layouts (unconventional for a novel, that is, less so for poetry) and type design. Viv, a writer from Toronto, is married to Tim, an ornithologist who has gone mad and is now permanently institutionalized. The stress of her caregiver role has led Viv to seek solace in the arms of Clive, a journalist who also happens to be Tim’s best friend. When Viv agrees to join Clive in Buenos Aires, where he’s researching a story about Iraqi art theft, both of them know the real reason they’re there.

Home from their tryst, Clive and Viv learn that in their absence Tim escaped from the home and drowned. Soon after, Viv discovers she’s pregnant. The final chapter finds Clive and Viv living in Brooklyn, where they’ve come to begin a new life with their daughter Chloe.

The novel—whose design was a collaboration between Marche and Gaspereau Press typographer Andrew Steeves—is divided into five chapters, each of which employs a different visual strategy (some use several). There’s also a pullout colour subway map of New York, the station and place names changed to reflect the characters’ psychic landscapes. The book’s dust jacket notes that Marche and Steeves were influenced in part by, “the interwoven texts, geometric shaping and pattern-making of Hebraic calligraphy, illuminated manuscripts and incunabular typography.” Concrete poetry and wedding invitations also seem to have played a role.

Stylistically, Marche’s writing runs the gamut between expository transparency, stream-of-consciousness musing and poetic abstruseness. The latter reaches a riotous climax—literally—when Clive and Viv have sex in the chapter entitled “Life of Flesh,” which ends with a comically grandiose, page-filling “O.” Here, the metaphors and similes are so thick you can barely see your hand in front of you, though Marche’s pillow talk is arguably less likely to get readers hot and bothered than it is to stoke their wanderlust: “He wants to be the architect of Roman roads down the curves,” “…his mouth like April rain down the Japanese crane of her rope-coiled neck,” or “Tasting the side of her belly, the cage, the last, rib, the under, the giving, and then the South Pacific island of her hip: atoll.” Vegetarians in particular should prepare to be appalled or else reconsider their abstemious ways: “her palms rise from the beef of his back”; “Kisses. Belly bacon” or “She slouches in the furniture of her mind, watching her hand sculpting his clayey penis. The taste of that Malay pineapple. Bloody steak.”

Presented as a series of short paragraphs printed at right angles to each other, the above passages also require active participation from the reader, who must turn the book in motions evoking, presumably, the lovers as they toss about in their sheets. Some have pointed to the dog-chasing-its-tail hilarity that would ensue were one to attempt to read this book on an iPad without the lock function on—not that it would ever be available for the iPad—yet the prehensile stamina required to grip and splay the diploma-worthy pages (Gaspereau prides itself on its bindings, and I can attest that the boast seems entirely justified) often made me wish this were an option.

Where Marche and Steeve’s design does succeed admirably is in the second chapter, “Dinner at La Cabrera,” an extended, pre-coital scene set in a Buenos Aires restaurant. Verso pages are assigned to Viv, rectos to Clive. Each is divided into two columns, those closest to the gutter representing the pair’s actual conversation, the outermost their thoughts as they speak. (Though the novel’s default typeface is the elegant, serifed Huronia, for the latter Marche and Steeves have chosen Gill Sans, a classic sans serif typeface strongly linked with the BBC and thus a rather curious choice to represent the subconscious.)

Refreshingly, the layout allows visual pacing to replace the clutter of endless, but usually necessary, “she said”s, or “he paused”s. Rapid repartee is indicated by single line spacing, silence by blank paper. As in life, the characters’ thoughts often stray absurdly far from what they’re actually saying, but occasionally manage to synch up completely.

Marche has self-consciously produced not just a novel, but an artisanal loaf as well; a reminder, in the continuously dawning age of the ebook, of the homespun glories of the traditional press. It’s safe to say that this was done in a celebratory rather than reactionary, or maudlin spirit. Marche has previously signalled that he’s no Luddite by producing an interactive novel for the Web, Lucy Hardin’s Missing Period, in which the reader determines outcomes by clicking on a series of links.

Yet Love and the Mess We’re In sometimes seems to butt up against the limits of its typographical aspirations. A section describing Viv and Clive’s apartment in Buenos Aires, for example, uses blocks of text to indicate the layout and proportion of the various rooms: the description of the courtyard is printed on the diagonal, the closet is represented by two tiny lines in italic, the type representing the balcony is set at right angles to the living room. This feels, in truth, not so very different from a poem about Christmas written in the shape of a Christmas tree; it can be done, yes, but should it?

Elsewhere, wavy lines of text representing rain (one archly declares that “Novelists should never try to describe the weather”) produce the awkward kerning pairs that are the frequent byproduct of digital type-on-path tools. Moveable type is only so moveable, as many of the authors who have flocked to the graphic novel in recent years have no doubt concluded. Marche’s rectilinear chunks of wrapped text can bring to mind an 18-wheeler spinning donuts in a parking lot, or a Clydesdale urged through a steeplechase course.

Marche creates another problem, story-wise, by tying the novel’s emotional arc to Clive and Viv’s hand-wringing over their supposed betrayal of Tim. Even before the official transgression, we’re told that “..their hidden crimes [are] begging to be stripped from them.” The word “adultery” is ominously conjured on a number of occasions, both in Clive and Viv’s private thoughts and in conversation. At one point, a page resembling a papal bull trumpets the word in bold neo-gothic type. But who, other than a divorce lawyer, actually uses this term in everyday life? More to the point, as Tim himself speculates, “Is it even possible to cheat on someone who’s insane?” A love triangle, by necessity, needs more than two sides.

Marche is a bold writer who’s not afraid to wander off the beaten path, which is a good thing. Generally speaking though, the more strenuously he exerts himself, the more inert the writing feels. The best parts of Love and the Mess We’re In, to my mind, are the ones where he allows more idiomatic prose and humour to seep in.

For all its flouting of narratorial convention, the novel ends with a disarmingly anodyne message of hope and renewal. Despite Clive and Viv’s festering guilt about Tim—“the sword between them in their bed and the shibboleth on their joining tongues”—spring has arrived in Brooklyn and the couple’s sights are now squarely set on the future represented by their child. A heady night of undercooked steak and tropical fruit has yielded, wouldn’t you know it, the scent of daffodils and the redemptive possibility of a wide-eyed, suckling babe.

Comments: Comments Off on LOVE AND THE MESS WE’RE IN
by Stephen Marche Posted by: admin Categories: Adult Fiction, Reviews Tags: Canadian Notes & Queries, Fiction
← THE RESTORATION ARTIST
by Lewis DeSoto
THE AFTERMATH
by Rhidian Brook →